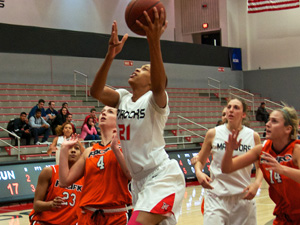 Pacific outscored Northridge 47-31 in the second half led by guard Erica Mckenzie’s 26 points on 8 of 10 shooting from beyond the arc.

“They did a good job shooting from the three point line and we obviously didn’t do a good job guarding the three-point line,” said head coach Jason Flowers. “Giving up 47 points in the second half is a lot points.”

In the second half, the Tigers shot 60.9 percent from the field and 80 percent from downtown with 15 three-pointers for the game. Pacific went on a 25-9 run that extended their lead to a 21 points.

“It started with us giving up penetration,” said Flowers. “Anytime you give up penetration it causes problems and that was key in tonight’s loss.”

The Matadors had one bright spot which was going down low in the paint by winning the rebounding battle 42-30 with a 17-3 edge in offensive rebounds and outscored the Tigers 34-16 in the paint.

“I feel like we did a decent job at keeping them out of the paint but we didn’t do a good job at rotating out of it,” said senior forward Violet Alama, who had 15 points and 13 rebounds with eight of them off the offensive glass. “They got a bunch of open shots and got into a good rhythm. Momentum was just going their way (and) we just needed to respond differently.”

CSUN started the game out on a 9-2 run, but it was quickly responded to by two three-pointers from Mckenzie. The teams traded baskets until Northridge got out to a five point lead, but the Tigers answered with an 11-4 run to end the half with a 27-25 lead.

On the offensive end, the Matadors did not fare much better as they shot 33.3 percent from the field and 28.6 percent from beyond the arc.

“I think that some of our shoots were not falling that we are used to going in,” said Alama. “We got a lot of open looks we just got to put the ball in the basket.”

CSUN was not able to take advantage of 12 more shot attempts and more four trips more to the free throw line.

Northridge’s next game is against UC Davis on Saturday at the Matadome. It is followed by a three road game trip against Cal Poly, UC Santa Barbara and Hawai’i.