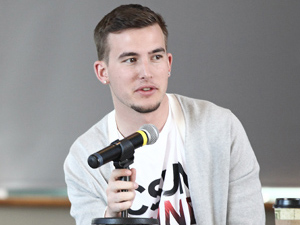 Tim Szczepanski, Outdoor Adventures coordinator, presented a video to give senators a visual idea of how the camp would look.

“We try to start traditions that lead into the future and that’s what we’re looking for here,” Szczepanski said.

Senator Joseph Zapantis said that the camp was a “wonderful opportunity to get students excited” about CSUN.

Faculty Adviser Veda Ward suggested offering “camperships,” similar to scholarships, to incoming students, in order to fund the “the diversity of the campus” that is representative of Northridge.

General Manager David Crandall reminded the senators that this camp will not replace general orientation.

“This is not in competition with normal orientation, it’s an augmentation of it. Orientation on steroids, if you will,” Crandall said.

Crandall also suggested that students who take part in the camp could be surveyed afterwards, to see if the experience affects their academic performance. He also reminded the senators how this camp could help boost school spirit and a sense of community on campus, but acknowledged the costs of it.

A.S. has not made any definite decisions about the funding or sponsorship of a Freshman Orientation Camp at this time. However, Vice President Christopher Woolett told the other senators to keep the project in mind.

“We’re all going to have our own opinions about how we think the program should run, but we need to trust the program,” Woolett said. “And I trust Outdoor Adventures.”

The Senate also discussed and approved the sponsorship of the Vagina Monologues. The show needed last minute funding for interpretive services, and in order for A.S. to assist them quickly, they had to sponsor the event instead of following regular funding procedures.

“Although it was brought to our attention on short notice, I think it’s an important event for A.S. to sponsor, ” Talar Alexanian, Senator of Upper Division I, said.

The Model United Nations requested $9,963 to help fund travel to a national conference in New York, and an additional $2,000 to alleviate food costs for students. Model United Nations, who is among the top in the state and country, is currently considered a club for the Spring. This means they are more dependent on funds from the Senate.

“I think we should stay consistent with how we fund our other clubs,” Woolett said. “I recommend not providing the additional money.”

The Financial Committee granted the club $9,963, but the additional $2,000 was not. Many senators disagreed with the decision, which could be reevaluated at their Feb. 22 meeting.

The Senate also approved a change in the elections calender for this semester. The polling place in the Satellite Student Union has changed its hours to be from 4p.m. to 8p.m in order to accommodate students in housing. The filing period to register to run in elections has been changed to Feb. 27 through March 11.