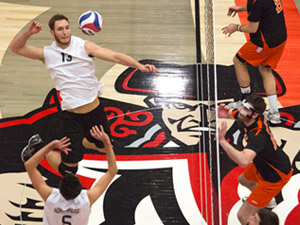 Sophomore setter Alex Jones had a game high 47 assists in his second game as a starter, filling in for injured starting sophomore setter Travis Magorien.

“I’m definitely comfortable playing with these guys, the team has given me a lot of confidence,” Jones said. “There are a lot of things I need to improve on, it’s about the process, not about each individual play.”

Head coach Jeff Campbell also had high praise for Jones in his first win as a starter.

“Coming off the bench, he hasn’t played all year. That was gritty, he played hard,” Campbell said. “He did a great job, I was really proud of him tonight.

Hitting a season-high .479 as a team, the Matadors didn’t commit an error until their 38th swing of the game. Despite winning only one set, Pacific was able to hit .303 for the match.

In the first set, the Matadors and Tigers went back and forth, but a 9-2 run put the Matadors up 19-10. Northridge closed out the set, thanks in part to an .800 hitting percentage, which surprised Lebrock.

“We didn’t find that out until after the game but we were very pleased with how we hit,” Lebrock said. “It all came down to our passing, that’s how we hit so well.”

Campbell was also impressed with his team’s effort in the first set.

“We served and passed really well and that was the biggest part of it,” Campbell said. “Offensively, you can’t really ask for much more than that.”

Pacific was able to come alive in the second set, trading points back and forth with the Matadors. The score was tied nine times throughout the set and saw the lead change hands seven times. Northridge eventually lost a close set to Pacific 24-26.

In the third set, the Matadors and Tigers exchanged points again. Northridge pulled away with from a 10-10 tie and went on a 7-3 run to make it 17-13, capped off by a kill by Baker. The Tigers mounted a comeback to pull within two at 23-21, but the Matadors notched another set win 25-22.

Wearing down Pacific, the Matadors were able to take a 16-13 lead in the fourth set. Holding the Tigers to a .138 hitting percentage, their lowest of the match, Northridge ended the set on a 9-4 run to seal a 25-17 win.

“In the third and fourth game, we stuck to our game plan and we were able to pull it out,” Lebrock said. “We just wanted it more than them.”