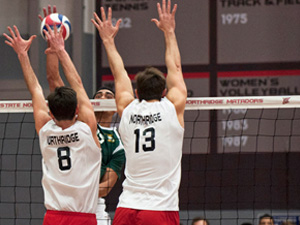 The Matadors (6-5, 4-5 MPSF) suffered their second home loss of the season Friday when third-ranked Stanford (9-4, 6-4) came into the Matadome and took the final three sets en route to a 3-1 victory.

The Matadors struggled both offensively and defensively after the first set, which happened to be the only set they managed to outhit the Cardinal. On the defensive side of the ball, CSUN allowed Stanford to hit .466 and amass 60 kills. Offensively, Northridge didn’t fare much better as it hit .221 and struck down just 46 kills.

Led by outside hitter Brian Cook’s game-high 21 kills and outside hitter Steven Irvin’s 14, the Cardinal never gave Northridge much of a chance in the second and third sets. In the second set, Stanford outhit the Matadors by a wide margin — .778 to .208. The third set ended similarly, as the Cardinals continued pressuring CSUN, outhitting them .619 to .115.

Leading the offensive charge for Northridge were its trio of
double-figure players who each garnered at least 10 kills apiece. Sophomore outside hitter Kyle Stevenson finished with 10 while senior
middle blocker Jared Moore had 11, leaving senior opposite hitter to
strike down a team-high 13. Moore also had four overall blocks and a dig
to round out his night.

The final set was closer as the Matadors fell 25-21, fighting bravely to force a fifth set. CSUN was as close as 22-20 before a late 2-0 run set up match point for Irvin, who hit it and give his team their second road win of the season.

CSUN’s next game is Saturday at the Matadome as they prepare to go up against No. 11 Pacific.