NAFTA, not citizenship is the solution for undocumented workers 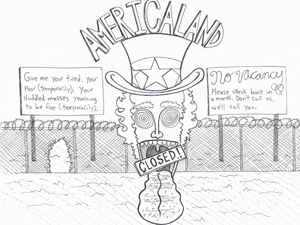 Immigration reform is back in the national spotlight with a bi-partisan Senate group, the president, and several congressmen pushing for it. This reform will tackle issues such as streamlining the current migration process, providing amnesty for those here illegally, and border control enforcement. The key to immigration reform will ultimately rest on allowing migrants to come here to work and live, which is beneficial, but we should not extend the welfare state to cover them.

A solution could be the expansion of the TN (Trade NAFTA) status to include low skilled workers. The TN status was created as part of the North American Free Trade Agreement (NAFTA) to ease migration controls between the USA, Mexico, and Canada and covers several professions. However, it lacks a category for low skilled workers. Instead of granting them U.S. citizenship, current undocumented workers would be allowed to adjust to the TN status.

The TN status should also be modified to exempt those under it from paying payroll taxes, which go towards funding social welfare programs. It goes without saying of course that social welfare programs must be reformed in such a way as to not allow those on TN status to have access to them. In short, these individuals would be allowed to work and live in the U.S. indefinitely, but would not be granted citizenship or otherwise become a strain to the taxpayer.

Other minor changes to the TN status would be changing its length from three years to 10, affording a grace period that allows people to change jobs, and letting them renew their status while working in the U.S. By reforming the TN status, undocumented workers will ultimately become beneficial to both U.S. citizens and those foreigners who come here.

I am an undocumented immigrant and, as a libertarian-conservative, I have several friends who hate those who are here without papers. On any given day, I can check my Facebook stream and see their statuses badmouthing undocumented workers. Yet, they continue to be my friends and have never suggested I self-deport. Several of them forget my legal status despite my constant reminders.

There is something of a joke within the economics community that you want everything in the world, but you only demand what you’re actually willing to pay for. While many certainly want to deport all undocumented workers, they aren’t actually willing to pay the cost. They aren’t willing to stop employing us, accepting our money, or being friends with us, and yet they have the opportunity to make a principled stand and utterly fail.

The country’s problem with the current immigration policy is not migrants coming here to work without paper. The problem is that the U.S. is a welfare state that redistributes wealth. Increasing migrants will mean an increase in the number of those receiving welfare benefits, but doesn’t necessarily mean an increase in the amount put into the coffers of the government. The real criminals aren’t those of us, who crossed into the U.S. without authorization; it is those politicians that created this desirable welfare state.

The plan to expand the TN status of immigrants is by no means perfect. Mexicans compromise a significant portion of undocumented workers in the U.S., but there are others. Ideally, migration restrictions against these areas should be removed or NAFTA extended to include Central America, the Caribbean and our other neighbors. I believe this reform would be superior to simply granting amnesty in that it allows future generations of those within NAFTA to migrate here easily.

Senator Marco Rubio, (R-Fl), has made a similar proposal to grant a special visa to current undocumented workers here, but the problem with his proposal is that it doesn’t take into account a way to easily allow new immigrants to come here legally. Nor is it sufficient to even vaguely discuss expanding our work visa scheme. In the past, politicians have either underestimated demand for foreign labor or placed unrealistic national quotas that incentivize people to come here illegally.

Using the framework of NAFTA, we can allow the market to decide how much foreign labour is needed. When they aren’t needed, they can return home without having to worry about being denied entry in the future. When we need them we can import them in mass.

If the market is allowed to work, it can find the perfect balance of foreign workers. In the early 20th century, the Bracero program allowed unskilled laborers to enter with minimal restrictions and it was a success. We can replicate this success by expanding the TN status.

In the rare event that the welfare state is abolished then by all means, we should welcome everyone on Earth, Mars, and beyond to come into the U.S. Until then, we must be careful to ensure that new immigrants can live and work here in peace, but do not aggregate the current problems of the welfare state.