Study finds CSU students among those with lowest loan debt 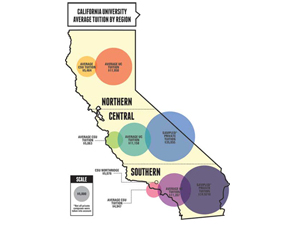 A recent study found that CSU students have one of the lowest debt levels in the nation, with CSUN averaging $16,172, slightly lower than the CSU average.

Matthew Reed, program director at the Institute of College Access and Success, where the study was done, said “Student Debt and the Class of 2011” is the seventh annual report on cumulative debt for students in public and private non-profit four-year colleges.

“We take the data for each college as reported to Peterson’s (as well as data from) the U.S. Department of Education to calculate the state and national averages,” said Reed, who is one of the primary authors of the report.

He said that 55 percent of public and private non-profits actually reported, which represented 79 percent of 2011 graduates.

“This was a large amount and therefore captures student debt well,” Reed said.

“The CSU prides itself on being able to provide access to higher education for students,” said Stephanie Thara, web communications specialist for the CSU. “We do that through our low tuition and offering a robust financial aid package.”

Willene Aisporna, senior child and adolescent development major with a federal student loan, said her loan did not affect her choice of going to CSUN.

“Compared to other schools, CSUN is among the most affordable, so I’ve heard. So I wouldn’t be surprised if it’s said that students here have the lowest amount of debt,” she said. “I think that if a university has the program or degree you want or need, then that would be the best place to be despite the cost.”

Because of the Cal Grant financial aid program, which is granted by the California Student Aid Commission, CSU students have the third lowest amount of debt in the state, the study said.

CSU’s are the largest recipient of Pell awards in the country, with more than 130,000, or 36 percent, of CSU undergraduates receiving Pell Grants compared to the national average of 31 percent for public four-year institutions, Thara said.

Dr. James Dow, chair of the department of finance, real estate and insurance at CSUN, said if programs like the Cal Grant were to be eliminated there would be lower enrollment at the CSU’s and higher tuition would make UC’s look more attractive.

“Students who are eligible to attend both a UC and a CSU have to decide whether the higher UC tuition is justified,” Dow said.

Without financial aid available, some students like Tania Liu may decide to invest in other institutions.

“The money I received through the Cal grant and Pell grant were some of the reasons I decided to attend CSUN and not UCLA,” said Liu, who received her marketing degree in 2008.

Liu said all the money she saved at CSUN helped her pay for graduate school because she was no longer in debt.

Thara said the CSU provides a total of $2 billion in financial aid for students each year and most CSU bachelor degree recipients graduate without any student loan debt.

Reed said colleges that report to Peterson’s alone are not enough data. The Institute for College Access and Success takes that into account when calculating their numbers and compares it to the U.S. Department of Education’s national survey on student loan debt.

“One recommendation in the report is that the U.S. Department of Education collects the data at graduation and then it would be required every year,” he said. “The last time they collected data was in 2008 and it wasn’t from every college.”

The mission of the project, Reed said, is to raise awareness of student debt and advocate for policies at the federal, state and college level to reduce the burden of college debt.

Aisporna said she would advise students to take time looking into grants and scholarships to minimize tuition costs.

“Taking loans out is very easy and some people end up using the money on things other than school,” she said. “Be smart about it since you do have to pay it back.”