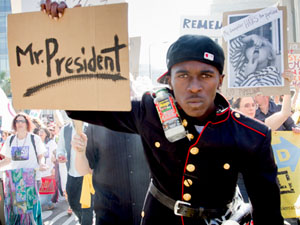 CSUN students joined hundreds of protesters in front of Los Angeles City Hall, and thousands across the nation on Sunday, calling for President Barack Obama’s attention on climate change.

The rally, “Solve the Climate Crisis! Take a Stand Mr. President,” was held in conjunction with a larger rally hosted at the National Mall in Washington D.C.

Protesters hoped to bring attention to the Keystone XL pipeline proposal and encourage the president to make good on his promises to act on climate change.

“It’s important to show solidarity with groups you agree with,” said Jason Ackerman, 27, anthropology major at CSUN. “I hope Obama finally commits and says ‘No’ to the Keystone XL Pipeline.”

Hundreds of people gathered at Olvera Street around 1 p.m., carrying signs and banners. Many dressed in black to signify their opposition to “big oil.” Signs reading “Fracking sucks!” and “Clean coal is a lie” were held high in the crowd.

Demonstrators filled the square and marched down Main Street to City Hall. Banging drums and chanting “Clean energy now!” the throng of people made their way peacefully to their destination. Police blocked traffic all the way to Spring Street where the march ended and the actual rally began.

“It doesn’t matter what background you come from, this is going to affect you regardless, whether you’re a Republican or Democrat,” said Edy Alvarez, president of the CSUN Greens political club. “We just had one of the worst droughts in American history and that’s going to affect food prices for everyone.”

Ed Begley Jr., who served as host and announcer for the event voiced his opposition to nuclear energy. Other speakers addressed the nation’s reliance on fossil fuels, the dangers of fracking and the use of tar sands.

“I’m for safe nuclear energy. And the only safe nuclear reactor is right up there, 93 million miles away,” Begley said, pointing to the sun above him.

A couple, Umberto and Patti Lazzari, brought their 6-year-old daughter, Sofia, to the rally. They said they wanted to show her that people can stand up and have their voices heard.

The Lazzari’s are concerned their daughter’s generation will eventually have to pay for society’s inaction on climate change issues.

The rally concluded with musical performances including one by The Billionaires, a satirical musical group dressed in black top hats and three-piece suits. Their rendition of “This Land Is Our Land” included the lyrics, “Global warming will cause a riot, we’re pumping oil so we keep it quiet.”

Rabbi Jonathan Ackerman reminded the assembled crowd of a quote by Elie Wiesel.

“The opposite of good is apathy’,” Ackerman said. “If we continue to fight for good, we will win.”