Students continue to be victims of bike thefts 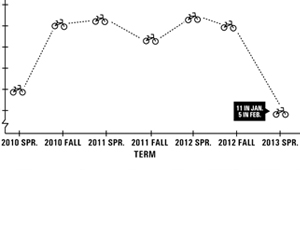 Bike thefts continue to be a consistent problem on campus, with already 16 reported instances in 2013, according to the CSUN Police Department.

According to Christina Villalobos, public information officer for CSUN PD, since 2010 there have been anywhere from five and 22 bike thefts reported to CSUN PD every month, with a drop during semester breaks. There were a total of 136 total thefts reported in 2012.

“Just like any type of crime on campus, it fluctuates. It depends on what period of time we are talking about,” Villalobos said. “Bike theft in particular has always been a concern on campus.”

The two most recent bike thefts were reported on Feb. 12 and Feb. 13. One of the thefts was only of the front tire and the bullhorn of the victim’s bicycle secured outside Cypress Hall, according to CSUN PD.

Most of the stolen bikes are not properly secured to bike racks, or they are secured with cables that can be cut through in seconds, Villalobos said. CSUN PD suggested students use a quality, hardened “U-shaped” lock on their bikes rather than a chain or cable lock, which can be easily cut with pliers.

“(Bike thefts) usually happen with no witnesses, and there is no information to go on,” Villalobos said. “Those (who) we have arrested have been very young, college age, and they are probably going to blend in the with campus very well.”

Senior film production major Juan Reyna said he had his bike stolen in front of Manzanita Hall at the end of the Fall 2012 semester, and his girlfriend saw someone attempt to steal her bike in front of the Oviatt Library.

“She was getting out of the library, and there was a girl breaking the chain,” Reyna said. “My girlfriend yelled at her, and the girl (said) ‘sorry, sorry,’ and then she ran away.”

Reyna said both instances went unreported to the police. He still uses a cable lock, but since the incident, his girlfriend has switched to a “U-lock.”

Senior Dennis D’Alfonso, of the CSUN Bicycle Collective, said he has been working with CSUN PD and Physical Plant Management on bike theft prevention for two years. He said there are two main reasons why bike theft is prevalent on campus.

“It comes from both the lack of knowledge of how to lock (bikes) properly and the poor design of the bike racks we have here,” D’Alfonso said. “We’ve been trying to remove the current bike racks that are here and put better ones in, because they don’t allow cyclists to park their bikes properly.”

CSUN PD suggests several options for protecting bikes on campus, including a bicycle registration program that allows students to receive a serial number to their bike, and if it is stolen, the police department will have a better chance of recovering it and returning it if it is found.

To ensure the best protection of a bike, CSUN PD recommends parking them in the Matador Bicycle Compounds, which are securely gated and only allow access for registered students and faculty. They are located on the ground floor of the B3, B5 and G3 parking structures and in the University Park Apartments complex near buildings 11 and 15.

“We didn’t have anyone register for the bike compound in 2009 (when they were first opened),” Villalobos said. “It was a really rough start, because people really didn’t know why it was there and who could use it, but with our ongoing efforts, we try to get the word out everywhere we can.”

Villalobos said 327 bike were registered by students and faculty in 2012, but many students see the locations as an inconvenience.

Bryna Nevison, junior anthropology major, had her bike stolen from her home in Northridge. She said she has never heard of the compound.

“Honestly, that sounds dumb,” Nevison said about parking in the compound. It would be too much of a hassle to register her bike just to park it in a gated lot away from class, she added.

Reyna agreed that the structures were not worth using if a student has to walk across campus.

“People don’t like to do that,” Reyna said. “It’s too much of a hassle, because then you still have to walk to class.”

The decision comes down to a student’s priorities, Villalobos said. Students choose between parking their bike a bit farther away and having it in a more secure area or parking it right outside of a building on a rack, making it more susceptible to theft.

“It really comes down to choice,” Villalobos said.

Freshman Kenny Pelaez had his tire ripped off and his inner tube stolen from his bike last semester on campus.

“I’m not that worried about it happening again, but if it does, I will have to be more cautious,” Pelaez said.

Pelaez said he has not registered his bike but will consider doing it.

“It’s a big problem at many Universities,” D’Alfonso said. “They all have their problems, but they have different ways of reducing theft, and we are not doing that enough here at this school.”

“Registering your bike and registering for the compound are free,” Villalobos said. “If you choose not to park it in the compound, that’s your decision, but at least invest a little bit more money and buy the proper lock.”