The face of the stuPED athletes 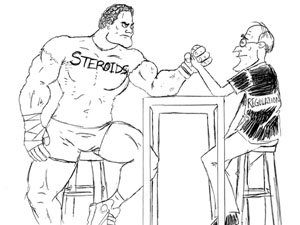 Today the sense of sportsmanship is absent in sports as players put winning above everything else.

The truth is that the majority of athletes just don’t care anymore. Fans glorify them, kiss their ass and idolize them. Yet, players repay fans by spewing out lies and a fairytale that makes all parties involved look absolutely foolish.

In the last few years, many well-known athletes from various sports have tested positive for performance enhancing drugs (PEDs). Most recently, high-profile cyclist Lance Armstrong, has been the face of this repulsive trend and publicly admitted to Oprah Winfrey that he used PED’s during his career. His doping ‘confession’ got him banned from competitive cycling for life and stripped him of the seven Tour De France titles he won between 1999 and 2005.

In recent years, and especially after Armstrong’s confession, some have suggested legalizing PED’s on all levels of sports in order to level the playing field. There are a myriad of reasons why this is an irresponsible and downright insane proposal.

The biggest issue with doping is the existence of a multitude of drugs that cannot be tested. A very thin line exists between illegal and legal PEDs, making it easy for athletes to get away with doping. Perhaps more importantly, testing is flawed and inconsistent.

According to the 2011rule violation report by the United States Anti-Doping Agency (USADA), common rule violation among athletes included failing to report their whereabouts, such as their mailing address or email account to USADA. If the athletes do not file their whereabouts, then the USADA cannot conduct testing without advanced notice. This rule was broken by 236 athletes while 37 were reported for a doping violation.

Although athletes who receive three warnings in an 18-month period for not providing accurate information or failing to report their whereabouts can be punished, it still gives them plenty of time to figure out their next move or even win a title.

Armstrong relied heavily on this technique before figuring out his next strategy in his long doping scheme. Therefore, without more consistent testing and stricter punishments, players will continue to get away with what they can.

Perhaps more importantly, the use of PEDs creates a serious health risk to athletes. According to the World Psychiatric Journal, side effects of steroids include liver function abnormalities, kidney tumors, endocrine and reproductive dysfunctions, testicular atrophy, lipid and cardiac effects and psychiatric symptoms.

It’s imperative to keep in mind that despite all these side effects, athletes still choose to harm themselves. There is only one explanation for this irrational behavior– money. No matter what their team colors are, athletes will always have an affinity for the green. Big contracts and endorsements are all part of the reward for dominating in one’s respective sport, but endorsers are either unaware or intentionally ignoring the “training” regimen that sometimes includes popping pills and injecting yourself with human growth hormones (HGH).

The motive behind sports is to outplay the other team and win fairly and honestly. Let us not change it into who can consume more drugs. Legalizing PEDs is not only absurd, but also a lazy solution that brushes aside a problem that can be and needs to be fixed.

Furthermore, legalizing PEDs neglects the crucial component that gives status to the world of sports and athletes in the society– the fans.

Fans are the ones spending countless dollars buying jerseys, merchandise and tickets to support their favorite players and teams. Win or lose, fans show unconditional love for their favorite squad and this kind of respect needs to reciprocated by athletes.

Many fans would rather see their team lose using their natural abilities as oppose to superhuman abilities that defy the laws of gravity and medicine.

Tearing your triceps midway through the season and then coming back to play at a high level in the playoffs defies medical convention and common sense, especially at the ripe old age of 37. Unless you are Ray Lewis and magically re-grow your muscles using a healing extracted from deer antlers.

Modern day athletes should look to athletes of the past. But the reality is, many athletes of this generation have an asterisk by their name. A big, fat, bold, italicized, 32-point-font asterisk that blemishes their reputation as athletes, and quite frankly, destroys any thought of them being decent human beings.