Students donate blood to help others 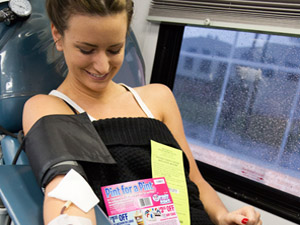 She said she did not find out about the incentive of a pint of Baskin Robbins ice cream until signing up.

“I didn’t
even know about (the ice cream), but that is a bonus right there,” Perry said.

She is excited to share her experience with friends through social media.

“I’ll probably post a picture on Instagram (saying), ‘Hey, I donated blood,'” Perry said. “So everyone’s going to see that and hopefully it draws people over.”

According to Hill, the blood drive brought in enough students that she will be raising her goal for the next on-campus drive, which will be March 11.