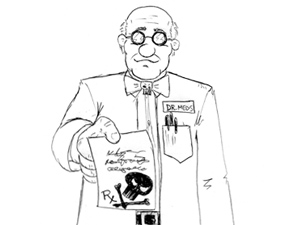 It is said to be safer than illegal drugs. Yet, it kills more people than heroin and cocaine combined.

A federal data released Tuesday showed that drug-overdose rose for the 11th straight year. Most of deaths were caused by prescription drugs, making it the growing trend of a legal, accessible and facilitated path to an early, accidental death for this generation.

From a young age, we are socialized to believe that illicit drugs are dangerous and therefore refraining from illegal substances will provide a wider path for success. However, the narrative has neglected the role of prescription drugs from educators and politicians alike. Consequently, many of us grow up believing that because the Food and Drug Administration (FDA) approves prescription drugs and our education neglects its negative consequences, it must therefore be safer than illegal drugs.

If the current epidemic of prescription drugs (especially among the younger generations) is not adequately answered with an aggressive policy; the subtle, chemical massacre will create devastating, long-term consequences for this country.

For decades, the government has devoted considerable resources to arresting and convicting anyone involved in the illicit drug trade. According to the 2013 report by DrugSense, a non-profit organization involved in drug policy reform, “the U.S. federal government spent over $15 billion dollars in 2010 on the War on Drugs.” This is a rate of about $500 per second. Furthermore, “someone is arrested for violating a drug law every 19 seconds.”

Politicians have stalwartly supported the ‘war on drugs,’ claiming that the use of illegal drugs have dropped by roughly 30 percent over the past three decades. Yet, the same aggressive ‘war’ approach has not been taken into consideration when it comes to legal, prescription drugs—a decision heavily influenced by money.

According to the World Health Organization, the global pharmaceuticals market is worth $300 billion a year; a number expected to rise to $400 billion within three years. Additionally, six of the largest drug companies are based in the United States.

Perhaps more significantly, in the last year’s election, the pharmaceutical industry spent more than $69 million on lobbying in the first three months alone. This explains why our leaders, who are supposed to be working for the public good, continue to steer clear from this topic. All the while allowing more lives to be affected and lost to prescription drugs.

In a capitalistic system, profit comes before the well being of others. This is why health commercials regularly remind us of what is wrong with us. Subsequently, the only way to solve our problems is to “buy” better health. In this case, the products being sold are drugs that can magically treat any problems we are facing. Stressed out? Take a pill? Depressed? Take another pill. Sad? Well, the pills will definitely put a smile on your face.

A 2012 study by the University of Colorado Denver, found that painkiller products prescribed legally in the U.S. increased more than fourfold, from about 40 million in 1991 to nearly 180 million in 2007 alone. Furthermore today’s teens and young people abuse prescription drugs such as Vicodin, Valium and Oxycontin at a rate 40 percent higher than previous generations.

Among college student, self-medicating psychological distress with prescription medication is a growing trend, according to the 2012 study published by the ScienceDaily. Yet, most students do not know that prescription drug can actually have a reverse, dangerous effect.

Almost 13 percent of the college student participating in the 2012 study reported using non-medical prescription drug. More importantly, the study found a strong link between prescription drugs and depression. Those who reported feeling hopeless or considered suicide were more likely to report nonmedical use of any prescription drug.

But let us not overlook the families who survive their children, but remain forever broken in body and spirit. Or those who continue to fight their addiction: a painful, vicious battle that has now become a nationwide epidemic.

Between 1995 and 2007, the country saw a 500 percent increase in the number of Americans seeking treatment for prescription opioid dependency. However, it’s imperative to remember that this epidemic should not to be fought as yet another failed drug war aimed at punishing victims with a serious problem or those who actually need medication to treat severe pain. Rather, this is an issue pertaining to the exploitation of people suffering for an interest-driven rational intention.

Of course, there is no way that we can benefit from choosing a healthier lifestyle such as exercise or utilize a better diet in an effort to reduce stress or body pain. This would actually insinuate that we are not lucrative individuals; a reality simply unthinkable for corporations.

Therefore, we are constantly told that the magic bullet to our health problem is medication.

We can no longer let corporations benefit from our misery and anguish. We can no longer let corporations make billions, while yet another family has to sit next to an empty chair at the dinner table. Every year, nearly 15,000 people die from prescription drug overdose. It is not until we bring to the forefront and hold accountable those who benefit from the pain a slow death of others, that we can save this generation from a grim future. If the government cannot act for us, we must. But an obsolete answer is detrimental to the progress of any society while deadly for the uninformed, exploited citizen.