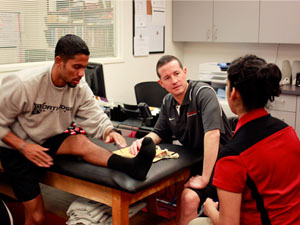 The Athletic Training Center is busy on any given weekday in the afternoon, but usually peaks around 2 p.m. when almost all of the seven black treatment tables are occupied by a student athlete.

The Center is divided into three different areas; one has a cold whirlpool with a couple of treatment tables to the side and a private office with the Center’s very own sports doctor. On the other side is a stretch of workout equipment which includes exercise bikes, upper-body bikes and treadmills. In the center of the room is an intimidating medieval-esque cage called the True Stretch, that is actually made for optimal stretching. But you wouldn’t know that if it weren’t for the help and direction of the athletic trainers.

The trainers are almost always sitting down when they’re talking with the students, carefully asking questions about the injuries—some questions common, others not so much—how they got hurt, where it hurts, how much it hurts, how old their shoes are (they leave no stone unturned) and how they sleep.

Above one set of treatment tables is a laminated poster of the detailed anatomy of the hip and knee muscles.

Trainers are overheard asking students to walk. They pay attention to how the student takes steps.

Kendall Moskal, 18, a freshman and psychology major, plays on the women’s soccer team. She understands the importance of the Center and proper conditioning before and after a workout. Moskal and her teammate, Hayley Greep, 19, are visiting the Center for the cold whirlpool.

“We just had conditioning for soccer. And so we’re here to take an ice bath. It drains all your lactic acid,” Moskal said. “It’s a faster recovery. I love it here. This is like the hangout spot.”

Greep, a family consumer science apparel design major, knows that it’s just as important if not more so to prepare for a workout than the workout itself.

“It’s really important to take care of your body, especially as freshmen. We’re not used to all the heavy lifting every single day and all the running,” Greep said.

The Athletic Training Center is made up of a close-knit family of athletic personnel. There are only four full-time athletic trainers, five graduate assistants, one doctor and a handful of athletic training students. The patriarch of this athletic family is Steve Grech, director of sports medicine and head athletic trainer.

Grech has a prestigious past. He has worked at USC as an assistant athletic trainer with head football coach Pete Carroll, and was part of two consecutive National Championship football teams. Additionally, Grech has worked with professional teams such as the Los Angeles Kings and the Oakland Raiders.

“If they get sick, if they get injured, we evaluate their injuries,” Grech said. “We travel with the teams. We’re basically first on site at practice and at games. And so if someone gets hurt in practice or games, we’re there to evaluate them. We basically act as the first responders. Diagnose their injuries and decide on the appropriate medical care. And if they need to see a doctor, we coordinate the doctor appointments. Then from there we’ll also do their rehab, their treatment and their physical therapy.”

Athletic trainers act much like the Wizard of Oz, a man behind the curtain that keeps the show going, seemingly with ease. The trainers are there before, during and after games and practices.

“The only time you kind of get to see what we do, sometimes, is if someone gets hurt in the court (or field), but the majority of our work takes place before and after the game and practices,” Grech said.

The Center is a must-see for students on the road to become athletic trainers who want to get hands-on experience, such as 20-year-old junior Erick Martinez.

“I came here undecided, leaning toward business and kinesiology and I did my observation hours (at the Center) and kind of found out that this is where I belong,” Martinez said. “I like the relationships built with the athletes, and got to know the staff, you know, working as a team. It’s a great opportunity. I enjoy it.”

Oscar Rinon, 23, an athletic training major, works as one of the athletic training students at the Center, is in his second year in the program. Rinon interprets being a trainer as a selfless and compassionate act.

“It’s our job to help them get better. It’s an altruistic kind of thing. We’re providing the best healthcare to them. A lot of athletic training students, they’ve seen injuries; they’ve even injured themselves so they can empathize with the athletes a lot. I feel as though if we can empathize with our athletes, we can provide better health care,” said Rinon, who is one year post-op from ACL surgery.

Rinon was a regular basketball player but did not receive proper conditioning, which resulted in his injury.

“Being conditioned… reconditioning some of these athletes is one of the biggest things,” he said. “Having them do exercise without them having that fear in the back of their mind, because if they do feel a little hesitant to come out and play, they’re just prone to more injuries. It kind of involves the whole psychological piece as well as the physical piece. A lot of people can recover from their physical injuries, but not mental. Some people are afraid to jump, some are afraid to land. So we try to transition them smoothly and safely.”