Who and what is nominated for this year’s Oscars 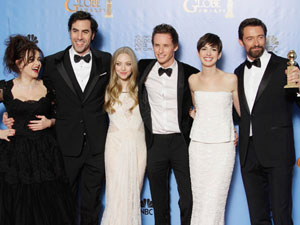 Best Picture
Amour: An elderly couple’s deep love for one another helps them to contemplate euthanasia as a way to cope with terminal illness. Oh the French.
Argo: Based on the declassified true story of how CIA Operative Tony Mendez saved six Americans during the Iran hostage situation of 1979, Ben Affleck’s thriller shows how the CIA extracted the Americans by posing as Canadian filmmakers, scouting locations for a movie set in Tehran. If you are mad at another white guy played a person of color in major film, don’t get too upset this time, the real Mendez said he doesn’t really consider himself Hispanic.
Beasts of the Southern Wild: This surreal/fantasy film explores a young girl’s life in the Bathtub, a tiny community living below sea-level at the edge of the southern wild, as it faces destruction, melting ice-caps and prehistoric monsters. Quvenzhané Wallis is just adorable.
Django Unchained: In his typical bloody and postmodern style, Quentin Tarantino presents a revisionist tale of American southern slavery in the Antebellum era. Django (Foxx), a slave who is freed by a German dentist-turned bounty hunter Dr. King Schultz (Christoph Waltz), goes on to kill a bunch of white slave-owners with his dangerous new friend. I hope you did not watch this movie if you preferred the version of Huckleberry Finn sans n-word.
Les Misérables: Anne Hathaway makes you cry and sings real good.
Life of Pi: Based on an original novel, Life of Pi tells the story of Pi Patel, an Indian Canadian who experienced an out-of-this-world adventure which began in a shipwreck. There are trippy colors, animals and 3D magic. Ang Lee wanted so much to present a film so visually stunning, he created a custom wave-making machine that he may never use again.
Lincoln: Daniel-Day Lewis portrays Abraham Lincoln in this drama about the bloodiest war in American history, illustrating how the careful political fight to end slavery was just as important as the physical warfare. If you thought Abraham Lincoln had a very deep voice, you might giggle a little at first.
Silver Linings Playbook: Pat Solitano (Bradley Cooper), diagnosed with bipolar disorder, leaves an in-patient care facility after eight months recovering from a violent episode in which he almost killed a man for having an affair with Solitano’s wife. After coming home, he struggles with his ups and downs between mania and depression, trying to evade his wife’s restraining order so he can win her back. He meets Tiffany Maxwell (Jennifer Lawrence), a recovering sex-addict, and agrees to compete with her in a dance competition in exchange for her help in contacting his wife. The crazy, stupid love ensues.
Zero Dark Thirty: Remember when we caught Bin Laden? It a took a lot of people, time, technology and wits to get Enemy No. 1 under control, and the filmmakers make sure the music is dramatic enough to make you feel just how nerve-wracking the world’s greatest manhunt was.

For more info go to http://oscar.go.com/