Women enter the Octagon as UFC fighters for the first time 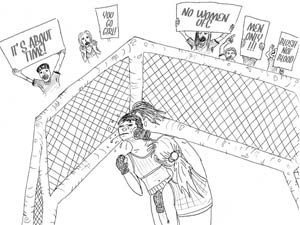 Two women are standing in the UFC Octagon ready to square off against each other for a fight in front of thousands of screaming fans. This scenario is one that should not come as a surprise to you.

Women have been fighting in professional mixed martial art matches since the mid-1990s over the past few years it has received more media coverage.

These female mixed martial artists, like their male counterparts, have fought and trained for many years. They are professionals just like men, who have taken time to master their craft.

They are at the top of their class and have prepared for the moment to display their skills and compete to win matches.

So why not let them showcase their talent to the thousands of mixed martial art fans across the world? The UFC is an organization, which in the past 20 years has grown dramatically and has gained thousands of fans.

It is a revolutionary sport that has changed the world of professional fighting, so why not add another new element to that?

Women fighters would not just bring a new aspect to the world of UFC, but would also attract a new audience. They would attract more women and male viewers alike.

I believe the addition of women in the UFC will also inspire other young female fighters. Seeing these women fighting will only push them harder to achieve their goal.

It will not take away from the aggressive nature of the sport. These women are fighters who will compete and are as dedicated to the sport as men.

They are looking to pin, knockout or make their opponent tap out of submission. The brutality and physicality will be as present as ever before.

So when the UFC has its pay-per-view event on Feb. 23 at the Honda Center in Anaheim, it will only be the start of something great. It is just the tip of the iceberg.

The Ultimate Fighting Championship is welcoming women fighters into its company Saturday, beginning with Ronda Rousey and Liz Carmouche. Personally, I feel this historical event should not happen.

Don’t get me wrong, I believe in equal rights. As a woman, I appreciate the sentiment of allowing women to participate in sports just like men.

I wanted to be a linebacker more than anything growing up. My brother even mentored me to play football.

However, mixed martial arts fights are just too severely physical. The UFC itself used the tagline “There are no rules!” Now this is not actually true. They forbid the fighters from eye gouging, groin attacks and throat strikes, to name a few.

The fact that the New Jersey Athletic Commission felt the need to put these rules in place, in 2000, shows how barbaric this sport can be.

I won’t go as far as Senator John McCain when he declared these fights to be an act of human cockfighting. Yet, I do agree with the 36 states that promptly banned “no-holds-barred” fighting, forcing the UFC fight locations to be limited to accepting states. This is one of the reasons you normally see UFC taking place in Las Vegas, California or out of the country.

If over half of our country’s states felt the need to stop this kind of brutal fighting, why should UFC be adding women to the lineup?

The aggression shown in the cage matches of UFC fights mirrors the violence the U.S. continues to crave. If the entertainment industry calls these acts of violence a sport, I’m concerned to see what’s next on the docket.

After nearly 20 years of UFC fights and women being excluded, this Saturday the world can tune in to watch the first ever women’s UFC duel.

I’m just hoping that in the years to come we don’t learn there are worse repercussions for MMA fighters than in other contact sports, and that we never see strategic maneuvers kill someone in the cage.