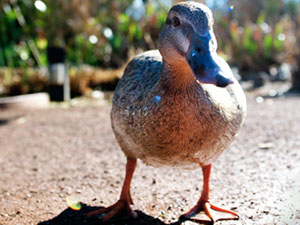 CSUN’s duck pond, located in the historic Orange Grove, is home to not only ducks, but turtles, fish and, most importantly, students that wish to relax for a few minutes.

According to Senior Director of Physical Plant Management (PPM) Jason Wang, the duck pond was originally intended for koi fish, and whatever evolved naturally.

But wildlife really began to grow after students and the community started leaving their own ducks and other animals.

“Some people came to talk to us about dropping off animals which we appreciate,” Wang said. “Others just drop them off.”

Wang said there are about 100 ducks present, which range from mallards to white Aflac-style ducks.

Grounds and Events Manager of PPM, James Logsdon, said there was a previous pond where the elevator for Chaparral Hall is currently located. When Chaparral Hall was built, many people spoke to Facilities Planning about the possibility of rebuilding a pond elsewhere on campus as a replacement.

“We didn’t want to lose that type of environment,” Logsdon said. After finding space in the Orange Grove, Logsdon and other workers began construction on a new pond in spring 2008. Logsdon and two others did the digging, and the complete construction of the pond took about four months.

In addition to ducks, about 150 turtles are also present, most of which are red sliders. The turtles came from what Logsdon and other workers caught from the original pond in addition to the turtles that are left by people.

No one controls the breeding or activities of the wildlife.The lack of interference has led to interesting findings in the pond, Logsdon said.

“You’d be surprised at what just shows up,” Logsdon said. “Fish like trout, bass…fish that obviously came out of someone’s aquarium.”

Another surprise to PPM workers were the types of plants that began growing in the pond.

“Most of those plants we did not grow ourselves,” Logsdon said. “There are things I grew in the rainforest that are now growing in the duck pond.”

For example, the bamboo plants that can be seen at the duck pond were not planted by the staff. Logsdon believes that birds have picked up seeds from other areas and just happened to drop them by the duck pond.

An issue that arises from the existence of the pond is the sighting of ducks elsewhere on campus and around the neighborhood.

“People will call me from the community to say my duck is in their pool,” Logsdon said.

Without being able to control where the ducks wander, or anything stopping them from leaving the pond, there really is no controlling where they end up, he said.

“We’ve even gotten calls from the SRC about ducks being in their pool,” Wang said.

While health concerns may arise for some visiting the pond, Wang said the pond is cleaned by the PPM and the use of pumps and filters prevents any issues. Logsdon confirmed that the pond is monitored every day and sometimes they have to get in the pond and clean out plants that have grown out of hand.

At any time students can visit, and if they have a quarter, they can buy duck food from the small vending machine and feed the ducks.

“I really love this campus,” Sanchez said. “The pond is like a little secret, and I love going during spring to watch and feed the ducks.”

According to Wang, the ducks have become domesticated with time.

“They will walk right up to you and you can pet them and they’ll eat straight out of your hand,” Wang said. “So if you’ve got the time and a quarter, swing on by.”