Crazy, happy and normal, what ‘Silver Linings Playbook’ taught us 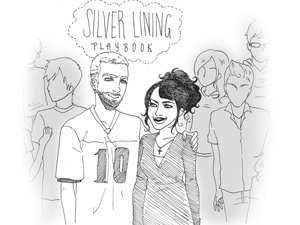 If you have a clinically diagnosed personality or mental disorder, then you might know what it feels like to be “crazy.” Your decisions sometimes do not make sense and can land you in precarious situations. You might spend way more money than you have and land yourself in copious amounts of debt. Your friends or family might not understand what is “wrong” with you and your friendships and relationships may suffer. You can often feel very depressed and hopeless, not wanting to go to work, school or even leave your house, but then sometimes feel so incredibly happy, emotionally and physically invincible that you sign up for several projects and make commitments that you cannot fulfill later on. And unfortunately, you might know what it is like to contemplate or recover from an attempt at ending your craziness, even though you know that suicide is the craziest thing you could ever do.

Fortunately, awareness of mental health issues are on the rise in politics and in popular culture. One such example is the widely successful film, “Silver Linings Playbook.” The film explores the challenges of trying to live a happy and meaningful life with a personality disorder such as Bipolar Disorder. It is nominated for eight academy awards: best picture, best director, best acting in all four acting categories, best film editing and best adapted screenplay. The film has been praised for approaching the issue of mental health without stereotypes or stigma, and the leading male actor, Bradley Cooper, has used his film-star status to promote more awareness for mental health issues.

However, other recent events have lead to some negative effects on how people view mental illness. The massacre of 20 young children and six Sandy Hook Elementary School staff in Newtown, Conn. has connected mental illness with terrible violence. Even though mass killings such as the shootings at Sandy Hook, Virginia Tech and Aurora, Colo. may have been committed by individuals with untreated or even partially treated mental illnesses, the majority of people living with mental illness are not mass murderers, but suffer internally.

It is sad that it took such a heartbreaking and horrible tragedy like the Sandy Hook massacre to spur our government and the public to recognize the importance of mental health. One can interpret that to mean that our country does not think mental health is not important unless it is a national security issue. It sends a message to those suffering from mental health problems that as long you don’t kill anyone, no one cares that you are hurting.

In reality, mental health problems afflict a vast amount of Americans and lower their quality of life. According to a 2010 report by the Center for American Progress, mental health disorders affect around 44 million adults and 13.7 million children each year in the United States.

“Suicide is the eighth leading cause of death and 80 percent to 90 percent of people who die by suicide are suffering from a mental illness,” the report stated. “Yet despite the facts that mental health disorders are as disabling as heart disease or cancer in terms of premature death and lost productivity, and most mental health disorders are treatable using medication and other therapies, fewer than half of adults and only one-third of children with a diagnosable mental disorder receive treatment.”

Hopefully, medical treatment and therapies will become more accessible through legislation such as the Excellence in Mental Health Act, which was introduced in the senate last march. Earlier treatment for those with mental illnesses will most likely help bring down suicide rates or increase people’s qualities of life.

However, we cannot look to medication and therapy to “cure” mental illness and the goal should not be to eradicate it from society. Instead, we should accept mental or personality disorders as a normal part of humanity, and though it may present unwelcoming challenges, we should realize that having a mental health issue does not mean that one cannot be a happy, healthy person.

The reason “Silver Linings Playbook” was so well-received by movie critics, audiences and mental health advocates was that its characters were well-rounded, humanized and “normal.” Its main characters, Pat Solitano (Bradley Cooper) and Tiffany Maxwell (Jennifer Lawrence) definitely exhibited some “crazy” behavior, but they also worked very hard to be happy and healthy. After initially regarding each other with some apprehension, they developed a friendship that helped each to heal and move on from traumatic events in their lives that exacerbated their personality disorders.

Solitano and Maxwell’s community viewed the two characters as wildcards and generally stayed away from them because of their past action with violence and sexual promiscuity. Their families and friends had trouble accepting and understanding them, much like how real families and communities might regard those with mental illness.

Solitano showed audiences that a mental disorder does not have to be in control of one’s life and that working hard and staying positive is necessary to be a productive and healthy person.

“You have to do everything you can, and if you stay positive, you have a shot at a silver lining,” said Solitano in the film.

However, Solitano expressed that he hated his illness and that he wanted to control it. Through their friendship, Maxwell showed Solitano, and the film’s viewers, that “crazy” people did not have to get rid of their craziness to be happy and love themselves for who they are.

“I was a big slut, but I’m not any more,” Maxwell said to Solitano in one scene. “There’s always going to be a part of me that’s sloppy and dirty, but I like that, with all the other parts of myself.”

What we can take from the film is that most people are not completely “normal.” It is not fun to live with a mental illness, but maybe those wise insights into life are the silver linings that make “crazy” people valuable contributors to society.

– Hansook Oh is a veyr happy and productive person who found a way to thrive, despite struggling with Bipolar Disorder.