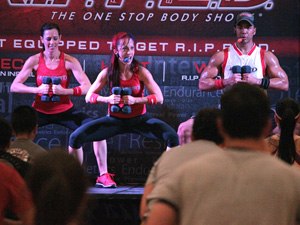 Creator of workout series, R.I.P.P.E.D. hosted a master class at the SRC Thursday night with more than 130 students participating.

The trainers were shouting words of encouragement and worked up a sweat as much as participants, while DJ Alex, from Final Touch Entertainment, mixed high energy techno tracks.

“I heard the event was going on and I really wanted to sign up,” said Amy Orsini, CSUN alumnus from Canoga Park. “My sister works at the SRC and brought my nieces too.”

Participants may have lost more than 750-1000 calories, said Shorter, which is typical for a R.I.P.P.E.D. class that uses high intensity interval training, combining resistance, intervals, power, plyometrics and endurance.

R.I.P.P.E.D. is offered in more than 2,000 facilities nationwide, as well as in Canada, Mexico and Germany.

“We loved the facility, it’s very impressive and our colors are the same as CSUN’s so we felt right at home. I didn’t expect this large of a crowd,” Shorter said. “The crowd was super receptive, fun and willing to learn.”