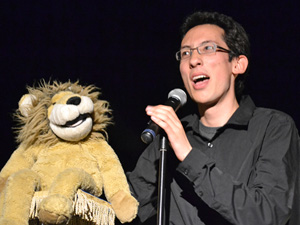 LGBTA hosted LGBTA’s Got Talent and RainbOlympics, a new event for the club, Thursday in the Northridge Center of the USU.

The RainbOlympics consisted of various carnival-style games in which students could compete to win prizes. It was followed by LGBTA’s Got Talent, a live performance where members of LGBTA showcased various talents.

Maria Hubbard, LGBTA events coordinator, said the RainbOlympics is a new event for the club, but not a new idea.

“The club has been wanting to do it for a while, but the past boards have not been able to do it,” said Hubbard, 22, senior screenwriting major.

The theme of the evening was “Love, Inspire, Motivate, Celebrate.”

“It’s called LGTBA’s Got Talent in the sense that it’s like America’s Got Talent, but there’s not a competition idea,” said Gabriel (Gabee) Cendoroglo, 21, freshman music major, who sang Elton John’s “Your Song.”

A raffle was held throughout the evening with prizes including $10, $15, and $20 MataMoney cards. All proceeds of the raffle and refreshments sold contributed to the club’s funding, Paramo said.

“I heard about (them) at the last LGBTA meeting and I thought it would be fun so I (put) on a sports bra and beat everybody at hula-hoop,” Swann said.

Students like Logan Porrazzo, 26, senior environmental biology major, and Andrew Riddick, 19, sophomore mechanical engineering major, said they came out to the event to support their friends and have fun.

LGBTA President Arutyun Ambartsumyan, a graduate student in the social work program, opened LGBTA’s Got Talent by performing “Love is the Answer” by Maya in full drag and concluded the event with a drag performance of “Triumphant (Pulse Remix)” by Mariah Carey.

“What we hope (the audience) got was some connection, some unity, fun, and they got some message of staying strong, staying triumphant,” Ambartsumyan said. “That was the point of my songs. That was our goal to try and instill that into the audience while at the same time having fun.”