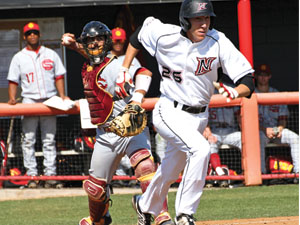 For the second day in a row, the Northridge (4-2) baseball team forced USC into extra innings, but unlike Friday night at USC (3-3), the Matadors could not pull it out, losing 6-5 in 10 innings.

On Friday night of a home-and-home series, CSUN was able to score five runs in the top of the 11th that included a two-run double by senior center fielder Cal Vogelsang, winning 9-5 in 11 innings.

“We did a good job battling back and getting back in the ballgame. My guys did a good job out of the bullpen, keeping us in a position where we could battle back,” said head coach Matt Curtis. “We just needed to do a better job early with our at-bats.”

The Trojans started a rally early with two hits in the first, putting runners in scoring position after a sacrifice bunt by sophomore first baseman Dante Flores. Junior catcher Jake Hernandez put the Trojans on the board first with a sacrifice fly to left field.

Northridge picked up their first hit of the game with two outs in the fourth by senior left fielder Nathan Ring, but failed to score.

Northridge seemed to have a chance to breakthrough in the bottom of the fifth as senior shortstop Kyle Attl singled to left field and stolen base, but a strikeout and groundout snuffed out any chance of a rally.

Despite the slow start the Matadors battled back in the seventh to tie it at 4. A fielding error by USC junior shortstop James Roberts, put a runner on first with no outs. Redshirt junior second baseman Tommy Simis singled to left putting runners on first and second, and Attl walked to load the bases. Junior Chester Pak came up as a pinch hitter, and hit into a fielder’s choice at second, scoring a run. Two throwing errors by the Trojans followed in the next two at-bats, bringing in the final three runs of the inning.

“We made an adjustment there to get us back into the game but if we could have done that earlier it may have ended with a different result,” Curtis said.

Roberts responded in the top of the 8th with a solo homerun to left center, putting the Trojans up 5-4.

The Matadors didn’t trail long, sending the game into extra innings with a run in the bottom of the 9th. With runners on the corners, redshirt junior first baseman Joshua Goodden-Brown picked up a RBI with a sacrifice bunt to tie the game 5-5.

After a single up the middle by Trojan freshman right fielder Vahn Bozolan to start the top of the 10th, a sacrifice bunt put him in scoring position at second. Junior third baseman Kevin Swick responded with a single to left to score the deciding run.

Rally caps were on as the Matadors faced their final at-bat to force another inning. Simis and Attl both singled with one out, putting freshman Nicolas Osuna, a pinch hitter, at the plate. Osuna struck out swinging and sophomore right fielder Michael Livingston followed looking.

“We should have made and adjustment on the pitcher a lot earlier than we did and finally our bats woke up and we started making stuff happen,” Williams said.

Senior pitcher Matt Munson picked up the win for USC, and freshman pitcher Sean Adler was credited with the save.

“We showed a lot of heart yesterday and we did the same today. So I think no matter what we are always in it,” Ring said.