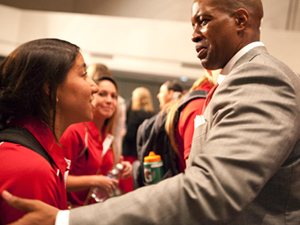 Dr. Brandon Martin, a former athlete with ties to the San Fernando Valley, was named Monday as the new athletics director at CSUN.

Martin assumes his position April 1 and will be among a small number of African-Americans, 7.4 percent, who head athletics programs at a Division I school, according to a press release. Martin held the position of senior associate athletics director for administration at University of Oklahoma prior to his hiring at CSUN.

“This was an opportunity to make history, to leave an indelible print on the Northridge community, on the San Fernando community and the people in this room,” Martin said. “It was an opportunity that I worked hard for for the past 13 years, and quite frankly I’m ready to get to work right now. I was ecstatic to get the news from President Harrison.”

A search committee welcomed five candidates to campus in open forums with faculty to understand and get an idea of what each of the candidates’ goals would be for the campus community. President Dianne F. Harrison, who announced Martin’s new position, said he stood out among the other candidates.

“We had a very strong pool,” Harrison said. “To Brandon’s credit he rose to the top of that pool. For his passion, for his enthusiasm, for his ability to bridge athletics and academics. For his energy and his focus, his integrity and his values, his desire to win on the field, on the court and in the classroom, those are the qualities. His hunger, his hunger to put CSUN on the national map.”

Originally from the San Fernando Valley, Martin was a student-athlete on the Cleveland High School basketball team in the early 1990s. Current Matadors men’s basketball coach Bobby Braswell was Martin’s coach at the time.

Continuing his education, Martin earned his bachelor of science in primary education and general studies in 1996 at USC, while playing on the USC basketball team.

“Three priorities that will drive the mission and goals of our athletics department,” Martin said. “Priority number one is that we will embrace comprehensive excellence. We will strive for this in all that we do, in academics, welfare of our student-athletes, the way we sell our program, compliance and academics. Secondly, we will remain focused on academic achievement and growth of student athletes.”

“Priority three is vitally important, engaging the San Fernando community in our plan for excellence,” he said. “Get the people in the valley to be part of our team, part of our family, to take ownership of the athletics department.”

One of Martin’s biggest goals for CSUN athletics is to garner community, alumni, student and faculty involvement in sports. Setting himself a 100 donors in 100 days goal, Martin plans on meeting with 100 donors in order to garner support for Northridge athletics.

Previous Athletics Director Rick Mazzuto stepped down from his position in November 2012, for reasons unknown.