LA’s hold on the Valley should be severed 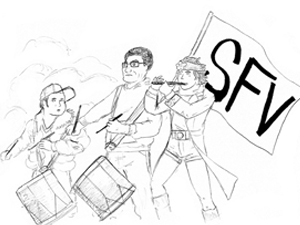 Why should someone spend all their time working to make a good government? The price of monitoring politicians and following local issues is costly. You may very well spend all your free time attempting to produce good government, but still fail. Given this incentive structure, it’s rational for most people to not participate in trying to make good government.

The influence of an individual or small group is increased as the size of government is decreased. This results in the average voter having a greater chance of influencing the outcome of an election. More importantly, a small government effectively decreases the cost of running a good government.

Secession would allow us to break apart the Los Angeles Unified School District (LAUSD) in the hope that it would free up resources to decrease classroom size. We could even institute a voucher system and do away with centralized schooling altogether.

The chief benefit of secession for CSUN would be an improvement in primary schooling. LAUSD recently lowered graduation requirements in a bid to increase graduation rates. A significant portion of CSUN’s freshmen have to take remedial classes because they are simply behind in basic math and writing skills. A more independent community would allow LAUSD to be split up ushering in reform to the education system. If for no other reason, secession should be supported to encourage better grammar by college students.

Secession would allow us to break up the Los Angeles Police Department (LAPD) so that we can keep them more accountable and decrease response times.
Secession would improve public transportation by giving the San Fernando Valley a better bargaining position when it comes to planning the expansion of the subway system and bus routes. Consequently, regardless of their political ideology, everyone has something to benefit from by seceding from the city of L.A.

The San Fernando Valley has attempted secession several times before in its history. The last serious attempt was a decade ago in 2002 when Valley VOTE, a pro-secession group, pushed for it through referendum. The valley itself voted in favor, but the city as a whole voted against the proposal.

Why did the city vote against the proposal? It’s because the San Fernando Valley exists as a net tax payer, which means it pays more in taxes than it receives in city services. The average resident of the San Fernando Valley is wealthier than our counterparts elsewhere in the city and thus, should have some vague moral obligation to pay more in taxes. However, no one has a legitimate claim on our income. We didn’t steal our income. We earned them by working. We provided goods and services that others were willing to trade their money for. Therefore, we should be able to decide how our money is used. The moral claim is actually to our rightfully earned income.

If private individuals wish to donate money to the city, they are free to do so. No one however should be coerced or forced into giving false charity.

L.A. is the second largest city in the USA and has a certain prestige to it. Therefore, it could be worth the extra tax burden. The San Fernando Valley is hardly a provincial area though. As an independent city, we are the 5th largest city in the U.S., after Houston. But, we have established ourselves well in the popular mind and don’t need to piggybank on greater L.A. reputation. Anyone who wishes to share in the prestige of L.A. is more than welcome to migrate to the city center.

Burbank, San Fernando, Hidden Hills and Calabasas are already independent cities from Los Angeles. Chaos has not erupted there. For the most part, these are affluent areas. CSUN has a larger population than all of these cities with the exception of Burbank. If these smaller areas are capable of being independent then certainly the San Fernando Valley is as well.

Ideally, a future San Fernando Valley would consist of several small cities of around 20,000 or less people each. It will take a while before we manage to reach such a state of local governance. In the meantime, splitting the San Fernando Valley from L.A. city is a start.