Young feminist shares her take on politics and other media 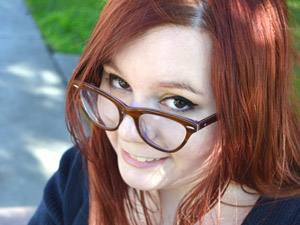 When people find out Skylar Grogan, 21, is a feminist, they often make assumptions about her and how she sees the world.

“Feminist” is a label that comes with all sorts of baggage and preconceived notions. But how does this CSUN women’s studies major really see herself and the world around her?

“Women’s studies has really opened my eyes to see how people interact with each other on the basis of our gender and how we communicate with each other,” she said.

Grogan sees portrayals of women in the media differently now than she did in the past. She is not always pleased with the way mainstream news portrays women in politics. More attention is paid to their choice of clothing and makeup than to the make up of their arguments, she said.

Though Grogan leans toward liberal political views, she is also quick to defend women like Sarah Palin and Michele Bachmann.

“Even though I don’t agree with them about anything really, I still don’t like how they’re portrayed in the media,” she said.

She may not have voted for the McCain/Palin ticket, but that doesn’t mean she thinks it’s fair to call Palin “Caribou Barbie.” Belittling comments and speculation about whether a woman is fit for office based simply on biology hurts all women, she said.

“We should be criticizing politicians on their policies and what they’ve said in interviews,” she said. “Not what they look like or who they’re married to. I wouldn’t want someone to do that to me.”

Lessons from her women’s studies classes color her choices of books, movies and even music. She likes to see strong, smart female characters on TV who can also be silly and even make mistakes. One of her favorites is Amy Poehler’s character Leslie Knope on “Parks And Rec.”

Grogan is a Harry Potter fan, but didn’t enjoy “Twilight.”

Her take on “The Hunger Games?”

“Team Katniss, all the way!” she said.

Like many teenage girls, she read Sylvia Plath’s “The Bell Jar” in high school and identified with the main character. She finds herself picking up autobiographies and memoirs by female activists like Elaine Brown’s “A Taste of Power: A Black Woman’s Story.”

Grogan said she’s also open to enjoying a good, old-fashioned trashy romance novel or an episode of “Keeping Up With Kardashians.”

“You can’t be a perfect feminist all the time,” she said. “Sometimes it’s nice to not criticize stuff all the time. It’s nice to watch something and just enjoy it for its face value.”

Once she finishes her bachelor’s degree, Grogan plans to spend some time working at a women’s shelter and giving back to the community. Her ultimate goal is to get both her master’s and then a doctorate in sociology. She hopes to teach sociology at a community college.