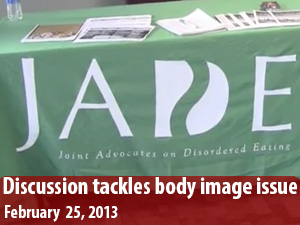 The national event is a collective effort made up primarily of volunteers who want to raise awareness on the dangers of eating disorders and the need for early intervention and treatment.

This year the national theme is “Everybody Knows Somebody” because eating disorders are spreading nationally, according to their website.

Andrea Elzy, coordinator for Peer to Peer education program at CSUN, said that this year they are aiming to shed light on vanity, health and the overall media message that plays a part in eating disorders.

Joint Advocates on Disordered Eating (JADE) put together several events, such as Mirrorless Monday, where mirrors are covered up and replaced with inspirational quotes. Other events include a speech by sociology professor Melanie Klein, who talked about health and vanity.

“People focus too much on the numbers on the scale rather than the health of the person,” Klein said. Klein also mentioned that it’s important to be aware that the media’s only purpose for what someone’s body should look like is strictly for profit while health purposes are never really considered.

Junior sociology major Charmane Bethune came to the event to learn more about how to avoid media portrayals of body image and construct her own standards of beauty.