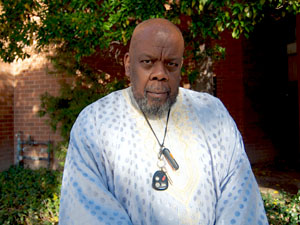 Waking up and going to sleep to the sound of gunshots and police sirens was all he knew. He had witnessed gang violence on the streets and liquor stores on almost every corner. At times, he would even go to sleep on an empty stomach.

No one would have ever thought he would become the first African-American from South L.A. to receive a full academic scholarship to both Harvard and Stanford University.

Johnie Scott, a Pan African Studies (PAS) tenured associate professor and director of community and external projects, grew up on the concrete sidewalks of Watts.

“Life in Watts wasn’t about the struggle,” Scott said. “It was about survival.”

Being raised in a single parent household, living in the projects, relying on government assistance and being a black male during a segregated time period was Scott’s life.

The 2010 poverty rate in Watts was 48.9 percent, according to areavibes.com. Watts’ total crime index is 4,563. During the week of Feb. 5, there were seven vehicle thefts, four burglaries, two larcenies, one sex crime, and one assault in Watts according to the crime mapping website.

Scott said in the late 1950s, Watts was completely different than it is today. The city’s population was about 95 percent black, according to the Urban Institute Watts Zone Profile, but today there are a significant number of Latinos/as. In 2007, The Urban Profile reported 65 percent Latino/a residents in Watts and 33 percent African-Americans accounting for the population.

Scott was raised in the Jordan Downs housing projects for most of his life and described Watts as a foreign country within the U.S.

He witnessed policemen crack skulls open, saw gangs chase people for blocks, and saw women get their purses snatched at night if they walked home without a stick in their hand.

“But somehow, out of wanting a place into which I could withdraw, I found a refuge in books,” he said. “I would read and go to the library by myself at 7 years old.”

Scott has always been involved in his academics and was student body president at Edwin Markham Middle School. He then went to David Starr Jordan Senior High.

“There were 47 high schools in L.A. and Jordan was ranked 47th in academics and poverty,” Scott said.

His high school graduation made the LA Times with him as the first black individual out of South L.A. projects to get a full academic scholarship to Harvard University.

Scott said Harvard had a student body of 10,000 and when he was enrolled, but there were only 55 Blacks.

“We felt whenever we were being called on we spoke for Black America,” he said. “If we hiccuped, Black America hiccuped.”

After his first year at Harvard, Scott dropped out due to poor academic standing. He returned home and became a janitor for Disney, working the graveyard shift making $72 a week. Scott said he quit the job after six weeks because he realized he couldn’t get very far on the route he was going. He wanted to move his family out of the projects and further his education.

A year later he returned to school and received a full academic ride to Stanford University. There he received both his bachelor’s degree in creative writing and master’s degree in mass communications.

Scott has had numerous accomplishments. He represented Watts at the 1966 White House Conference, received an Emmy Award for a NBC national special called “The Angry Voices of Watts,” and became a correspondent for different publications, including Time Magazine.

Scott also was one of the founders of Sons of Watts Community Enterprises and the director, writer and producer for his independent film, “Brothers Where are You?,” that CBS used a portion of during its “48 Hours on Gang Street.”

Scott has been teaching at CSUN for 29 years. He said he chose CSUN instead of Stanford, Harvard, Pepperdine, USC and other universities because CSUN is a people’s college, having a large amount of black students compared to other universities.

“(There are) more blacks at CSUN then USC, UCLA, Loyola and Pepperdine combined,” Scott said. “We need more blacks in education, particularly given the black population in L.A. There should be more.”

Scott said his goal as a black man and professor is to inspire students to strive for excellence. On the first day of the semester, Scott presents them with two concepts.

“The first being from Dr. King when he says the content of one’s character should be how we should be judged,” Scott said. “Second, James Baldwin’s comment in ‘The Fire Next Time.’ He writes of young blacks never being expected to aspire to be excellent but instead to settle with being mediocre.”

Scott said life is full of people who work hard, yet never make it. His advice for young students who are now living in a different, but similar world is maintaining a sense of hope despite discouraging notions.

“There are no magic bullets. I wish there was a panacea where I could say if there’s a will there’s a way or if you just work hard you will make it,” Scott said. “But you’ve got to believe in spite of the fact that you are living in what is still a racist society and that everyday gives you reasons to give up and reasons to drop out of the race. You got to hold strong.”