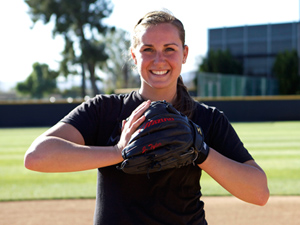 Redshirt sophomore utility player Jennifer Tyler remembers the day her sister asked to marry her and her boyfriend after seeing an episode of the Canadian show, “Degrassi,” where a couple was married by their best friend.

“We loved it,” Tyler said. “We thought it was more personal and our family isn’t religious. My sister, being super emotional at the time, asked me to marry her and her boyfriend.”

After an online questionnaire she took through some church she can’t even remember the name of, Tyler is now an ordained minister and has the certificate to prove it.

But Tyler takes her education and softball very seriously.

Beginning her college career at Northwestern, Tyler originally planned on being an OB/GYN. Difficulty finding the program and getting the credentials ultimately led Tyler down a different path toward biology.

“I was taking all these really intense classes like chemistry, calculus two and French, and I ended up dropping chemistry so I could pass the rest of my classes,” she said. “Grades are really important to me and I’m not OK with a C.”

She started taking some anthropology classes after her adviser recommended doing something beyond the typical biology major to increase her chances of getting into medical school.

Anthropology seemed like the right fit because of its strong biological aspect and involvement in human dynamics. The classes helped her find her passion and connect with her professors, she said. So she eventually changed her major, she said.

Tyler, now a junior at CSUN, has kept her anthropology major.

“I’m doing general anthropology, but I’m specialized in archaeology,” Tyler said. “I love learning about other cultures and learning about different traditions and rituals. I just think it’s amazing how diverse our world is.”

When transferring to CSUN from Northwestern, Tyler said she looked mainly at the demographics and location. She wanted to go somewhere different that had sun almost all year round, but still wanted to stay relatively close to her family.

“Living in Arizona my entire life, traveling to California, vacationing in California, has always been kind of a big bright side and a lot of fun in my mind,” Tyler said. “I also really wanted to help the softball program here and go back to what its traditions were.”

Growing up as the youngest of three girls all one year apart, Tyler was often in the shadow of her sisters. Tyler and her sisters were always involved in team sports; never individual sports.

Around seventh grade, Tyler was pretty serious when it came to playing both club soccer and softball, as were her sisters.

“It got really expensive for both my sisters and I to do that and it was a hectic lifestyle,” she said. “My parents knew that in our generation it was evident that club sports were your ticket into college. I chose softball mostly because my sisters chose softball.”

Softball has led to many memories for Tyler, and holds a special place in her heart because of the bond it created with her family.

“Softball is important to me because I played it with my sisters. I would say every memory I have of my childhood, every vacation we had and stuff of that aspect was surrounded with a softball tournament,” Tyler said. “We would go to a week-long tournament in Colorado and have maybe a morning game and the rest of the day was what we’d do as our family vacation. Everybody in the family talks about it, everybody knows about it and that’s why it really touches home and my heart.”

Tyler has not married her sister as of yet but believes it will happen in the next year or two. Besides that, Tyler has no other plans to use her title.

Now she’s taking on being a Lamaze coach for one of her sisters. Tyler was enthralled when her sister came home from her softball season seven months pregnant and needed to start her classes. She loved the idea of learning about the entire process and the development of the class.

“The first class I went to with her, I came straight from softball practice and was a complete mess. I stunk and my sister, of course, is all dolled up,” she said. “It actually helped out, though, when we went to the hospital the day she went into labor because I knew the whole thing about the focal point and her exercises.”

Tyler is set to graduate Fall 2013. She is debating between doubling up on classes and work towards both a masters of science in anthropology and a general masters of business administration. She’s considering a graduate school in Arizona, specializing in administration or human resource management.

Choosing to transfer to Northridge has been an uplifting experience not just for Tyler, but her entire family. The close proximity gives her family the chance to come out, see her play and support the team.

“Even my mom says constantly how much of a change she sees in my happiness,” she said. “I don’t know if it’s just (because it’s) always sunny and I’m not covered in two feet of snow all the time, but I just think what we’re doing out here is really going to translate to this season and I’m really excited to start playing.”

Even with such a passion for anthropology and her goal of getting a master’s degree, Tyler hasn’t lost focus as a softball player.

“I love softball and would be all for playing after college if someone would take me,” she said.