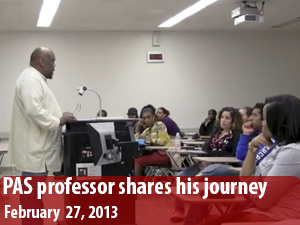 Waking up and going to sleep to the sound of gunshots and police sirens was all he knew. He had witnessed gang violence on the streets and liquor stores on almost every corner. At times, he would even go to sleep on an empty stomach.

No one would have ever thought he would become the first African-American from South L.A. to receive a full academic scholarship to both Harvard and Stanford University.

Johnie Scott, a Pan African Studies (PAS) tenured associate professor and director of community and external projects, grew up on the concrete sidewalks of Watts.

“Life in Watts wasn’t about the struggle,” Scott said. “It was about survival.”

Being raised in a single parent household, living in the projects, relying on government assistance and being a black male during a segregated time period was Scott’s life.

The 2010 poverty rate in Watts was 48.9 percent, according to areavibes.com. Watts’ total crime index is 4,563. During the week of Feb. 5, there were seven vehicle thefts, four burglaries, two larcenies, one sex crime, and one assault in Watts according to the crime mapping website.

Scott said in the late 1950s, Watts was completely different than it is today. The city’s population was about 95 percent black, according to the Urban Institute Watts Zone Profile, but today there are a significant number of Latinos/as. In 2007, The Urban Profile reported 65 percent Latino/a residents in Watts and 33 percent African-Americans accounting for the population.