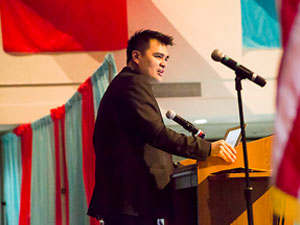 Jose Antonio Vargas, Pulitzer Prize winning journalist, undocumented immigrant and immigrant rights activist, spoke to hundreds of people on Tuesday as part of an ongoing national tour dubbed “Define American” where he urges dialogue on defining what it is to be American.

Vargas, who has contributed to such publications as the Washington Post, Huffington Post, the New Yorker, Rolling Stone and the San Francisco Chronicle, came out as an undocumented immigrant in a New York Times Magazine article titled “My Life as an Undocumented Immigrant.”

Since writing and speaking about his experience as an undocumented immigrant living in the U.S., Vargas has focused on building a mature and comprehensive debate on immigration reform.

“I don’t really consider myself an activist or an advocate,” he said. “I’m not a leader or an organizer. What I am is a story teller. I’m a filmmaker. I’m a writer. I’ve spent more than a decade as a journalist.”

Vargas traveled across the U.S. to engage in growing an understanding of the undocumented immigration experience.

“They’re not illegal anymore, as the Los Angeles Times still manages to call them,” he said. “Something is terribly wrong when we call them illegal. Actions are illegal, not people, never people.”

Immigration reform was a recurring topic throughout the event. Vargas pointed out the record-number of deportations under President Obama, totaling 1.4 million with estimates that by 2014 will reach 2 million.

“As we debate immigration in this country, the question really is the nature of citizenship: How do we define American?” Vargas said. “So we’re sharing stories. I’ve shared mine. Sometimes I wish that I didn’t, because sometimes it’s really hard. I feel almost naked in front of people, but I’m doing my part because all of us have to do our part. I don’t have any legal form of ID besides a Filipino passport that the Filipino embassy gave me shortly after I disclosed my status.”

He went on to say that the focus has largely been on young people, particularly students, in the immigration reform debate, but it should not stop there.

Both Congress and the president proposed immigration reform packages that focus on reprimanding undocumented immigrants who have entered the country illegally and placing them in “the back of the line,” a term used to refer to the multi-year wait period that many immigrants are on when going through the proper channels.

Chicana/o studies professor Rudy Acuña was acknowledged at the event by Vargas as an inspirational and historic figure for the state of California. CSUN is home to the nation’s first Chicana/o studies department, which was helped in part by Acuña.

“(Vargas) served as a role model for all of the students with a similar experience,” Acuña said.

Rosas is hesitant in backing President Obama’s immigration reform package, considering the high level of deportations under his administration.

“The language they’re using to describe what they’re trying to do is not even going the right way,” he said. “It’s still calling us ‘illegals.’ I don’t see it realistically, those 12 million immigrants, (that they) are going to get that chance. If you have a record, then you are put to the side. Unfortunately, not all of us are going to get covered. Just the few.”

Rosas understands that sometimes people have to be pragmatic.

“History will have to record that the greatest tragedy of this period of social transition was not the strident clamor of the bad people, but the appalling silence of the good people,” Vargas said.