Jerry Buss is the best owner in sports history 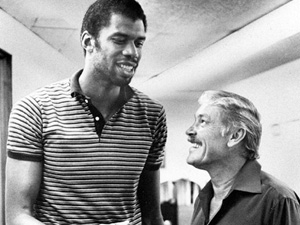 When I think about who is the best owner in professional sports, only one person comes to mind, and his name is Jerry Buss.

The late owner of the Los Angeles Lakers was an innovative one that not only changed the sport but also the standard by which sports owners go by now. Since his purchase of the Lakers in 1979, he has taken the franchise to a level of success that is matched by no other team in sports history.

In Buss’s first year of, he drafted Earvin “Magic” Johnson, who is widely praised as the best point guard to ever play the game, which began a 12-year stretch known as the “Showtime Era” which saw the Lakers make the NBA finals nine times, winning five of them.

After Johnson was forced to retire in 1992 because his contraction of the HIV virus, the team suffered a couple of down seasons but Buss found a way to bring the team back to glory by luring away Shaquille O’Neal from the Orlando Magic to the bright lights of Los Angeles in 1996. Buss followed that move by taking a gamble by listening to his general manager Jerry West and trading for a young 17-year-old high school player by the name of Kobe Bryant.

Buss was not done there. In 1999, he signed former Bulls head coach Phil Jackson, and in his first season coaching, the team won its first of three consecutive NBA championships.

In 2004, after the losing the NBA finals to the Detroit Pistons, Buss made another gamble. He let go of Phil Jackson and made the decision to keep Kobe over Shaq by trading the Big Diesel to Miami. The Lakers struggled early on, but Buss’ gamble eventually paid off. He brought by Jackson in 2005 and within three years, the team led by Bryant was back in the finals once again. One of the key reasons the Lakers reached the NBA finals was Buss pulling off a trade that brought All-Star big man Pau Gasol to the team from the Memphis Grizzlies for basically nothing.

Although the Lakers lost the 2008 NBA finals to Boston, it was just the beginning of Los Angeles’ new era as the Lakers won the next two titles, defeating the Orlando Magic and the Celtics once again.

What can be learned from Buss is one thing: he was a high-risk gambler, but it always paid off for him. He bought the Lakers in an era in which they could not defeat the Celtics in the finals, and he got them to defeat the Boston three times in the 1980s. The Lakers, under Buss’ 34 years of ownership, made the NBA Finals 16 times, winning 10 of them, which is most by any sports team in that period.

What Buss also did as a sports owner that changed the landscape of the NBA was that he mixed the sports world with Hollywood.  Buss brought the Lakers girls to the NBA, which are now a staple for every team in the NBA.  His “Showtime” Lakers brought celebrities to the game and made the Lakers franchise LA’s team.

As Jerry Buss stated: “The real purpose of what I do is try to have the city involved and identify with the team. I wanted when you think of LA that’s where the Lakers play. Lakers. Lakers. That’s what I wanted.”

That is what Jerry Buss did. He changed the culture and the landscape of the NBA and that why is the greatest owner in all sports history. Jerry Buss was an innovative owner who set the standard for what great sports ownership is. He was the gold standard.