Author asks students to find jobs that make them happy 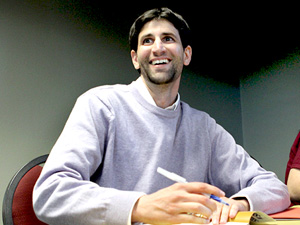 Daniel Seddiqui, author of “50 Jobs in 50 States,” spoke to students Wednesday about following their passion and getting a job that made them happy.

As a recent economics studies graduate, Seddiqui was rejected in 40 different job interviews and was kicked out of his house several times because of his failure to obtain a job.

Seddiqui said before beginning his journey across the U.S. he was desperate as a college graduate to find a job and that he was willing to take any job even as a dishwasher.

Seddiqui shared his most memorable experiences in jobs he worked during his journey and what he learned from each of them.

“You want to do something that you look forward to everyday not just for the money,” Seddiqui said.

The idea of starting a trek in search of jobs began with his curiosity of exposing himself to unknown places out of California, Seddiqui said.

One student liked that Seddiqui was not scared obtaining jobs all over the country.

“He faced his fear of rejection and he just went for it,” said Isela Saenz, 21, junior psychology major.

Saenz said she was planning on going into a job relating to her field and thinking about doing something that is beneficial to others.

Emily Hagan, pathways program coordinator for CSUN’s Career Center, said students can learn to go the path untraveled and make opportunities for themselves even though they do not currently exist.

Seddiqui said one of his favorite “rewarding and fulfilling careers” was as a dietician in Mississippi.

Some of the other jobs Seddiqui worked in were as a coal miner in West Virginia, a model in North Carolina, park entertainer for Universal Studios in Florida, an outdoor photographer in Alaska and a bar tender in Louisiana.