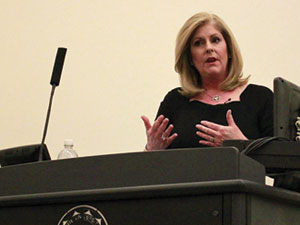 Sue Herera, CSUN aluma and co-anchor of CNBC’s “Power Lunch,” talked about her views on the financial world and notable moments in her career Thursday night at the Valley Performing Arts Center.

The 28-year veteran of business news graduated from CSUN with a journalism degree in 1981. Once she earned her degree, Herera was surprised to find herself applying for a job at the brand new cable TV station, the Financial News Network (FNN).

She had always seen herself as a print journalist, but at FNN she learned how the market worked from the trenches and called floor traders in Chicago for information about the days stock market trends.

“It was the best kind of learning, because it was eight years of learning on the job,” she said.

One of the biggest lessons came during the stock market crash of 1987 when the nation saw a 20 percent loss on Wall Street in a single day. The experience taught her that anything can happen and she said she never viewed the market the same way again.

“Never say never. If you didn’t experience that event, I think perhaps you’re much more sanguine about the type of moves the market can hand you in a very short period of time,” she said.

Covering the 1987 market disaster, at the beginning of her career, helped her during the recent financial crisis of 2008. She said having the experience to know what a 20 percent sell-off feels like allowed her to put the 2008 crisis in perspective.

By 1989 FNN’s prospects were failing and Herera thought it best to look for another job. That’s when she was approached to take a position at a new start-up network at NBC

CNBC was such a new idea, that the network did not think it would be successful. Herera said they would not even allow use of the iconic NBC peacock logo in their promos. Executives feared the new network would damage the image of the multi-colored bird.

But since then CNBC has been providing business news for more than 20 years.

After her presentation, the audience was given the opportunity to ask questions. Many people asked her opinion on specific market trends and one professor asked what advice she would give students who want to enter into business news.

“One thing that I would say is what they might want to do is take a job on Wall Street for a year or two,” Herera said. “I think if you are considering business news and you want to do the markets then I would advocate learning the way I did, just getting into the trenches and learn it from the floor. If you were interested more in the corporate side of it I would get a job at one of the investment banks and see how their culture works.”

Herera also had advice for young women getting into journalism and said to find something they’re passionate about and try to specialize in it.

“There are a lot of people out there who are generalists,” she said. “You have much more longevity as a woman in the business if you bring something else to the table.”