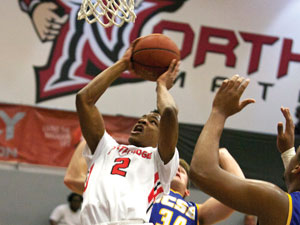 The Matadors (14-17, 4-13 Big West) lost their sixth straight game as they fell to the UCSB Gauchos (9-19, 5-11) Saturday night, and now have a very slim chance of clinching conference tournament berth.

Northridge was led by junior guard Josh Greene, who poured in 25 points on 8-19 shooting. Freshman guard Landon Drew also chipped in 11 points on 3-4 shooting from beyond the arc. After taking a two point lead into halftime, the Matadors failed to stay consistent in the second half.

“You have to play the whole forty minutes,” said head coach Bobby Braswell. “This has kind of been a broken record for us the last half of our season. When teams elevate the level of play, which is going to happen, we just haven’t responded well to it.”

The first half was a battle back and forth between the two teams, with neither able to assert dominance over the other. The largest lead in the first half was five, with each team reaching that mark.

CSUN was able to lead the first half in most of the statistical categories, shooting 47.8 percent from the field and 55.6 percent from behind the arc on 5-9 shooting. After playing well in the first half, Braswell didn’t feel like his team responded well to the physicality of the game, especially the second half.

“They were a whole lot bigger and a whole lot more physical than we were,” Braswell said. “That was one of the most lopsided physical games I have seen in a long time. We had no response to (Williams) and his physicality tonight, we couldn’t stop him.”

The Matadors struggled to push the tempo over the course of the game as they had four fastbreak points in the game, zero in the first half.

“They wanted to stop our transition and our fast-breaks,” Greene said. “A lot of teams know we are too athletic and want to push the ball in transition. It was just them executing their game plan against us.”

Opening up the second half, the Matadors surrendered the lead for the last time with 17 minutes left, and would never see it again. Within 10 minutes of gaining the lead, the Gauchos would open up their advantage to a game-high 12 points, 59-47.

The closest CSUN would be to the lead wouldn’t come until the last minute of play, when Greene hit a three-pointer with 35 seconds left to cut the lead to four. Five more points would be scored in the game, all by the Gauchos.

The Matadors gave up 40 points in the paint, largely due to Gauchos’ forward Alan Williams who scored 32 points and grabbed 16 rebounds. His size and strength proved too much for CSUN to handle as the game went on.

“Alan
Williams just came out and made a difference, he showed that he was
going to step up,” Drew said. “He was very effective against us.”

Only the top-eight teams make the conference tournament, and the Matadors currently sit 1.5 games behind UCSB for the final spot.