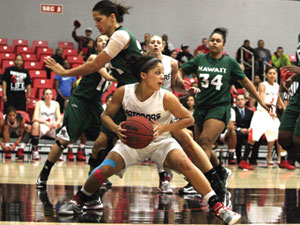 Finishing up their final road game of the regular season, the Matadors (13-15, 7-9 Big West) traveled to Hawai’i (15-12, 11-5) Saturday night to finish their home-and-home series with the Rainbow Wahine, ultimately losing 69-60.

Ultimately doomed by their first half play, the Matadors couldn’t get anything going. Northridge shot 21.7 percent on 5-23 shooting from the field, committed 15 turnovers and only scored 13 points in the half.

Coming out strong at the start of the game, CSUN would hold a lead for most of the first 10 minutes of the game. Up by five points just seven minutes into the game, it was a short lived lead for Northridge.

The Matadors next field goal would not come for over nine minutes, allowing the Rainbow Wahine to jump out to a six point lead. In the final 13 minutes of the first half, Northridge would only score one field goal.

Coming out in the second half, Northridge showed signs of life, outscoring Hawai’i 47-44, but it was too little too late. Cutting the lead to four points in the final minute, the Matadors were unable to get any closer with Hawai’i draining their free throw attempts.

Sophomore guard Ashlee Guay was one of three Matadors scoring in double digits. Guay led all scorers with 17 points on 7-15 shooting, including going a perfect 2-2 from behind the arc.

Rainbow Wahine junior forward Kamilah Martin was again a thorn in the side of the Matadors, leading Hawai’i with 15 points, one of four players to score in double digits. Hawai’i went to the foul line 28 times during the game, sinking 24 of their free throws.

CSUN is still alive in the hunt for a Big West conference tournament berth. Currently in sixth place, the top-eight teams make the postseason tournament. Northridge will round out its regular season with two home games next week against visiting Cal State Fullerton (9-19, 5-11) on Thursday and UC Riverside (11-16, 4-12) on Friday. Each of the teams are behind the Matadors in the Big West standings, and one win will wrap up a tournament berth for CSUN.