Club equality; a discrimination of its own kind 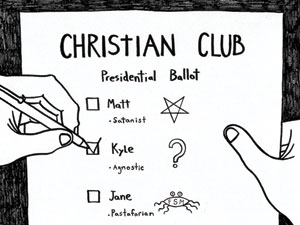 It’s a big word these days, and to be honest, it should be. The university system prides itself on being a safe place where different people and ideas come together in order to learn more about the world while also learning more about ourselves. Undoubtedly, the diversity of world-views is the strength of our campus. It influences us to see through the eyes of others, and often results in us challenging our own beliefs and comforts. As the president of a religious club and a student in the religious studies department, I’m afraid to say that tolerance is exactly what is being threatened today.

In December 2011, CSU Chancellor, Charles Reed, issued Executive Order 1068, a new ruling largely dealing with club and organization structuring. The language seemed fairly typical- “No campus shall recognize any fraternity, sorority, living group, honor society, or other student organization that discriminates on the basis of race, religion, national origin, ethnicity, color, age, gender, marital status, citizenship, sexual orientation, or disability.” A no brainer for most organizations. So then what’s the big deal?

The problem lies with the additions to the discrimination policies. Leadership selection now falls under the same criteria as membership inclusion and club charters are currently being scrutinized on CSU campuses. For religious groups, this means that religious adherence can no longer be used as criteria for selecting leaders.

Melissa Montecuollo, an intern with Intervarsity Matador Christian Fellowship said the leadership of any religious group helps determine the focus and emphasis.

“By saying that groups can’t have a statement of faith from whatever religion as a basis of their leadership, it’s almost like the group ceases to be what it is. Especially if the leadership culture must change so drastically, said Montecuollo.

The disagreement of the ruling seems shared by many of the members of Intervarsity. Throughout the week, students have been voicing their concerns. How can we help but have religious standards for Bible Study leaders who every day represent our religious values to the campus? Can we expect someone to lead the spiritual life of a new convert if they themselves don’t hold to the basic beliefs of Christianity?

Jaclyn Junker, a student Bible study leader said the ruling is in fact an indirect discrimination against religious groups.

“If sororities and fraternities can have exceptions for their requirements in the executive ruling [in order to protect their culture and identity] why can’t we?,” said Junker.

It ends up resulting in an attempt to be tolerant, while the school becomes more discriminatory. Religious groups by their very nature require religious skill sets on the part of their leaders to adequately operate and function with a unique community identity. To take away any sort of statement of faith on the part of the leadership structure is to potentially destabilize the identity of the group. And isn’t religious identity the whole point of religious clubs?

There’s an even more sinister problem lurking around the corner. Many religions have leadership requirements built into their doctrines, so by forcing groups to change their leadership requirements, the CSU system is quite literally discriminating against particular religions. In Intervarsity as well as many Christian clubs around the nation, leaders must adhere to “core values” or as the Bible calls it “sound doctrines”.

While the “values” of Intervarsity are general enough to encompass basic Protestant theology, they are also broad enough to allow virtually every denomination to feel comfortable. Beyond Christianity, I can’t imagine a Muslim student club allowing a non-Muslim member to lead Friday prayers, or a Jewish club allowing a non-Jewish member complete and intimate access to all the Jewish rites.

By limiting these groups, they will no longer be able to fulfill their religious obligations and students will be forced to make a choice: please the school’s clubs and organizations requirements or abandon long-standing religious ideals. There’s no contest. When California State University Northridge enforces Executive Order 1068, our campus will push away some of the religious organizations that currently represent our rich student diversity.

Tufts University in Boston recently faced a similar problem between the religious clubs and the University’s discrimination policies. The school‘s Committee on Student Life decided that exceptions must be made for any club that can show doctrinal basis for any leadership requirement that didn’t coincide with the University’s policy. The Chaplaincy is now allowed to evaluate each club and issue the exemptions as it sees necessary. This prevents religious discrimination while still protecting the student body.

The system in place at Tufts appears to benefit everyone affected by the policy. Consequently, the CSU system needs to come up with something similar that can protect students, both religious and non-religious. The reality is, religion is a strong force in our world. We cannot push out organizations that represent the voice of millions of people and the force of thousands of years of human experience simply because there is a misunderstanding between cultures. Yes,this affects my club for now, but who’s next? Where will the lines be drawn? It is the responsibility of the CSU system to work with the religious groups in order that our diversity and atmosphere of respect be maintained.