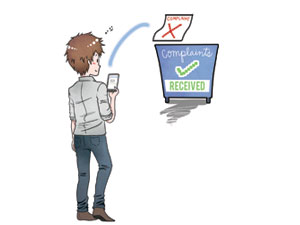 Displeased students will soon have an outlet to express their concerns regarding any on-campus problems.

Physical Plant Management is in the process of developing an online “complaint box” that will allow faculty, staff and students to voice their facility concerns on campus.

The online service will allow faculty and staff to submit formal complaints or work requests to help fix any issues in the campus facilities excluding facilities in the University Student Union, which has its own complaint department.

“I think it’s a great idea,” said Daisy Martinez, 20, junior public health major. “It gives the students the power over having a clean, safe school.”

Jason Wang, senior director of Physical Plant Management (PPM) said they are still unsure when the service might be available, but it might take a year before the students have access to the online service.

The program will allow anyone to submit a formal request through a cell phone, a computer or any device with Internet service.

“Our hope eventually is to really get it out there to students,” Wang said.

The web-based service will not only allow the students, faculty and staff to communicate their concerns to the PPM or the Work Control Center (WCC), but it will also provide them with a notification to let them know their request is being handled and keep them updated.

After the service is developed, it will first be tested by the Managers of Academic Resources (MARS). Depending on how it is received, it would expand to faculty and staff before becoming available to everyone including students.

Wang said they want to have the program “as soon as they possibly can,” but there may be a test launch within six months.

The PPM and the WCC for the campus facilities is in charge of building maintenance, plumbing, electrical and mechanical needs, paint and carpentry, and landscaping and grounds including pest control and indoor plants, according to PPM.

Dave Ross, assistant director of facilities and maintenance for the USU said they offer different options for students to communicate their concerns with the facilities in the USU.

Ross said they have Twitter feeds that allow students to tweet their concerns or complaints about facility issues and the complaints go directly to them.

Another option is the Sol Center, where a student can go to the front desk and report their concern in person. The USU also offers a main line to the maintenance shop where students, faculty and staff can call.

“We try to be proactive in our responses,” Ross said.

Ross said there were 107 work requests completed from Jan. 1 to Feb. 19 and there are currently 54 work requests in progress for USU-operated facilities.

As for complaints outside the USU, students, faculty and staff need to call the WCC (a sub-department under the PPM that controls the work) or go to the PPM offices to file a facilities complaint.

The new system should help students who, as of now, do not know where to voice any concerns.

Janet Rho, 22, senior, communications major said she did not know of a place where she could file a complaint.

“I would (probably) go to the main student office (in Bayramian Hall),” Rho said.

Wang said there were 2,930 calls reporting concerns to Work Control from Aug. 27 to Dec. 7, and 392 Work Control calls came in between Jan. 28 to Feb. 8. He added the calls are not categorized as complaints or concerns, and PPM does not keep a record of whether the caller is a student or staff member.

Wang said the most common complaints are the need for stocking or restocking in high-traffic restrooms such as Sierra and Jacaranda hall, coffee spills, water leaks, and changing burned out light bulbs.

When the issue is completed, the staff signs off the work order indicating the issue had been fixed. The person who calls the WCC for a complaint are not notified if their complaint or concern is resolved or fixed, Wang said.

He added the current system does not inform the students or anyone when their request has been fixed unless they request a notification, but most of the people do not request a call back.