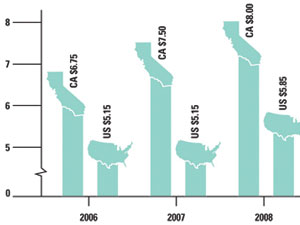 During his State of the Union speech earlier this month, President Obama called on Congress to raise the national minimum wage from $7.25 an hour to $9 by the end of 2015.

“This is a good thing, because I could earn more money,” said Maha Haddad, freshman interior design major, 18. “I work at Souplantation as a cashier and only receive minimum wage.”

Opponents of Obama’s plan said raising the national minimum wage might have an unintended side effect of employers hiring less workers to offset higher wages.

“When you raise the price of employment, guess what happens? You get less of it,” Speaker of the House, Rep. John Boehner, R-Ohio, said in a press conference. “At a time when the American people are still asking the question, ‘Where are the jobs?,’ why would we want to make it harder for small employers to hire people?”

Dr. James P. Dow Jr., professor and chair of the finance, real estate, and insurance department at CSUN, said Americans could see both the positive and negative predictions of raising the national minimum wage at the same time.

“The people currently in lower paying jobs would be paid more, but we could see a decrease in hiring at the low end of the market,” Dow said. “But it’s unclear what the net effect will be on the job market.”

If the national minimum wage is raised, it will still take time before California feels any effects.

“A raise to $9 over a three year period will have little impact right away because the wage will rise in increments,” Daniel Levitch, career counselor at the CSUN Career Center, said. “Only when we get the wage nationally over $8, since that is California’s minimum wage, will we feel any effects.”

The Federal Reserve Bank of Chicago conducted a study in 2011 finding that raising the minimum wage would provide an economic stimulus.

The study reported that for every $1 in minimum wage hikes, spending increased by $2,800 per household the following year.

Reception among local businesses over a potential increase in minimum wage is mixed.

“They should make minimum wage higher, and more businesses should hire workers,” said Narek Kurtikyan, manager of Smoke Stop on the corner of Nordhoff Street and Lindley Avenue. “But if employees are getting $9 an hour over $8, they should work harder.”

Others think employers should not bear the burden of having to pay higher wages.

“I don’t understand why it’s business owners’ responsibility to make sure employees can support their families,” said Kimberly Curriston, head cashier at Cupid’s Hot Dogs on Lindley Avenue. “Where is personal responsibility from workers? You have to live within your means.”

Some working CSUN students are unsure if their employers will act negatively to an increase in the national minimum wage.

“I’m not sure if this would affect my hours, but my bosses have cut hours before,” Haddad said. “I only work three days a week now.”

A Pew Research Center/USA Today poll found that 71 percent of Americans support a raise in the national minimum wage from $7.25 to $9 per hour.

According to the Economic Policy Institute, about 13 million Americans would be immediately affected with an increase in the minimum wage.

In order for the raise to take effect, Congress would have to approve the increase.