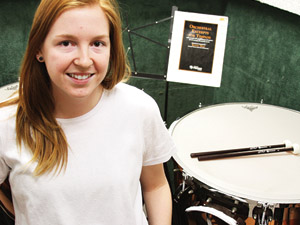 Sophomore music performance major Lindsey Eastham, 19, thinks that there are two states of mind in life: The first includes being stuck in the past and always planning for the future. The second involves approaching everything with a clear mind, immersing oneself in every experience.

Eastham subscribes to the second state of mind.

“It’s really important in performing to be clearminded, none of that mind chatter,” Eastham said. “You really have to be in that mindset all the time to make that happen onstage.”

Her everyday demeanor reflects that mindset. Eastham flows with life’s everchanging current, no matter which way it takes her. It is this go-with-the-flow mentality that enables Eastham to constructively accept criticism from her teachers and conductors so she is better equipped to perform.

She doesn’t obsess over past mistakes. Whatever obstacle she is thrown, Eastham finds a way to be flexible.

As a music performance major concentrating in classical percussion, Eastham learns how to play a variety of instruments, but has taken a special interest in timpani.

“I want to get a timpani spot in an orchestra,” Eastham said. “That would be an ideal job to get away from freelance work.”

Eastham has been involved in music since she was 4 years old when she began taking piano lessons.

“Piano is the most useful instrument to know when studying music,” she said.

At age 12 she transitioned to percussion when she joined the school drumline. But after a successful run in nationwide competitions, she decided to quit because of issues with the new band director.

“There was a power struggle for respecting him and the drumline coaches,” Eastham said.

Instead of staying in a bad situation, Eastham quit something she loved in pursuit of something new. She joined the youth orchestra and ended up discovering a new passion for classical percussion.

She currently plays timpani in the CSUN Symphony Orchestra and considers performing a way of communicating with people.

“When you experience performing something that’s exactly how you wanted it, it’s showing the audience how you see something,” she said.

Outside of her classes and orchestra rehearsals, she has been playing with a group of jazz majors.

“It’s really free improvisation,” Eastham said. It was in a session with those jazz majors that Eastham wrote her first real tune.

“You’re usually playing for $20 or free food, but it creates a network of people to rely on each other,” Eastham said.

Eastham still continues to play the piano even though her major requires her to do otherwise.

“Percussion was my serious instrument and I’m thankful for that now,” Eastham said. “I can play piano, sound terrible and it’s OK. I really enjoy that instrument being home and low pressure.”

Eastham doesn’t put pressure on herself to be perfect all the time, and it’s evident in her demeanor and her continuance in playing the piano. Her major requires her to take a break from her first instrument to focus on a future career with her current one.

For now, Eastham is a low-key and mellow girl with hopes of landing a future timpani position in an orchestra.

But if that doesn’t pan out she simply has one condition for what the future may bring her:

“As long as I’m playing music I’ll be happy where I’m at,” she said.