Who can extinguish the Heat? 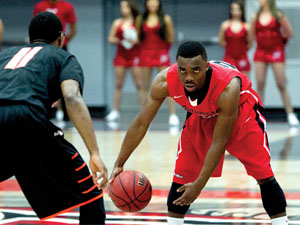 The Miami Heat extended their winning streak to 14 on Sunday morning when they beat the New York Knicks, tying their franchise record for consecutive wins. With the playoff push kicking into high gear, the Heat look poised to repeat their title run and give the king another ring. The path to the finals will once again flow through South Beach. Even with all their success however, there are realistically only three teams who can lower the temperature in Miami and give the Heat a run for their money in a seven game series.

Indiana Pacers
In a weak Eastern Conference, the Pacers are the only team who can match up with the Heat on the perimeter and also exploit the glaring weakness of the Heat: their front line. Paul George has arguably been the most improved player in the league and his length and quickness, along with Danny Granger’s, will create matchup problems for the Heat’s dynamic duo of Lebron James and Dwyane Wade. The Pacers also boast the best defense in the league and their size down low with David West and Roy Hibbert proves to be too much for Miami and their often smaller lineups. The Pacers were a thorn in the side of Miami last year in the playoffs and with two wins over the Heat thus far this season, Indiana looks to dethrone the champs this time around.

Oklahoma City Thunder
Out of all the teams in the Western Conference, the Thunder have the best chance of beating the Heat simply because of star power. Russell Westbrook, who is averaging 23.4 points per game, and Kevin Durant who is averaging 28.6 points per game make an incredibly efficient offensive duo. Despite all the controversy after the James Harden trade, the Thunder have received fairly good production from Kevin Martin off the bench who is averaging 14.5 points per game. This series will ultimately come down to Durant and James, two transcendent superstars who are playing in another stratosphere as of late. If Russell Westbrook can level his temper and play under control and Serge Ibaka can provide a consistent low post scoring presence, the Heat could find themselves thunderstruck in the finals.

Dark Horse: Memphis Grizzlies
A lot of teams counted the Grizzlies out after Rudy Gay was shipped to Toronto, but their defense and interior presence has led them to winning eight of their last nine games. The Grizzlies’ frontline tandem of Zach Randolph and Marc Gasol has proven to be the best offensive and defensive post combo in the league. Couple that with Tony Allen and Tayshaun Prince as potent and athletic wing defenders, and you get the second ranked defense in the league, allowing only 89.6 points per game. There are few teams in the league who can match up with the Heat but from top to bottom, the Grizzlies have the manpower to do so. Last week, The Grizzlies held James to 4-14 shooting, which was his worst shooting performance of the season. If Prince and point guard Mike Conley can combine to fill the offensive void left by Gay, the Grizzlies might be able to squeak by the Thunder and reach the NBA finals.