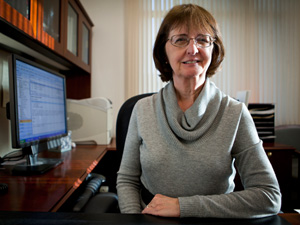 Associate Vice President of Faculty Affairs, Dr. Penelope Jennings, announced March 1 that she will retire in August after 12 years in the position.

Jennings will not be leaving the campus community and will stay to teach in the department of business law, where she began her career at CSUN in 1979.

“They call it ‘retreating,'” Jennings said. “As tenured professors, we are given the right to go back to our teaching positions if we enter academic administration.”

Jennings’ career began after receiving compliments on her teaching skills from coworkers while practicing at a law firm.

“My secretary was taking a business law class (at CSUN), and I would help her with her homework and her case analyses and she said, ‘You know, you’d be a really good teacher,'” Jennings said. “And then I was involved in a really high profile case as an attorney and the judge on the case said, ‘You know what, you’d be a really good professor of business law.'”

She then called the department chair of business law and said she was interested in teaching. After that phone call she was put into the part-time faculty pool.

“I taught one class a week that first semester and then I would drive downtown to court,” Jennings said.

After three semesters of teaching part-time, she knew she wanted to become a full-time faculty member and became one in 1980.

“I became a tenured full professor in business law, and really, that is a wonderful job,” Jennings said.

Jennings remained a full-time faculty member until 2001, when then provost Louanne Kennedy asked if Jennings would be interested in working for her.

“I had never aspired to work in administration,” Jennings said. “I was really happy, I loved my job as a faculty member, but I thought, ‘You know, I’m going to try this out.'”

Jennings joined Academic Affairs in August 2001 as the interim executive assistant to the provost. Her first few weeks in administration were affected by a national tragedy.

“Sept. 11 happened approximately three weeks after I started in administration,” Jennings said. “I worked on the Aftermath Program Planning Committee to attempt to support the campus during (that) really difficult time.”

The committee helped develop a website as well as coordinate presentations and community efforts to cope with the effects of the terrorist attacks.

In November 2001, Jennings was appointed assistant provost, the position in which she served until July of 2003 when she became interim associate vice president of faculty affairs. In April 2005, the position was made permanent.

As vice president, one of Jennings’s main responsibilities is the interpretation and implementation of bargaining agreements for faculty and teaching assistant salaries and benefits.

“It was a very time consuming but rewarding experience. I taught labor and employment law and now I do labor issues and employment issues. It was a chance to do what I really care about,” Jennings said.

Jennings said one of the things she is most proud of is her work hiring people for the faculty affairs office.

Many of the people Jennings hired said they will miss her as she heads back to the department of business law.

“I’m going to miss our daily discussions and interactions of what’s going on on campus,” Albert Alcazar, administrative analyst, said.

William Whiting, senior director of academic personnel, said Jennings has done such good work that other CSU campuses model their work after hers.

“The work she does is very challenging, but she does it with great grace and humor,” Whiting said. “Penny is very well respected both on campus and throughout the entire CSU system.”

While she said she will miss faculty affairs, Jennings is excited to get back to teaching.