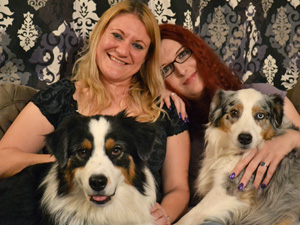 Cadence Valentine is no wallflower.

When it comes to transgender issues, she is a proactive advocate. By prioritizing, organizing and having the courage to persistently challenge the status quo, she brings about awareness and positive change.

Valentine, a psychology major, and queer studies minor, is a full-time CSUN student, peer mentor at the Pride Center, Gamma Rho Lambda sibling and an activist. She also happens to identify as a transgender woman.

She came out as transgender in spring 2011, first to her partner Trista Hidalgo, and later to a handful of close friends.

“I came out to Trista first and I could only wish upon a person that they have such an amazing rock, and such an understanding soul,” she said.

The couple met through a mutual friend and have been together for 12 years.

“She’s the person I fell in love with and it doesn’t really matter. It was kind of easy to accept,” Hidalgo said. “She is more in-tune with me and has become more in-tune with herself. I think her being happier has made our relationship better.”

Valentine’s network of support not only consists of her partner and friends, but also her therapist and medical team. Some of her family, including her mother, on the other hand, still have a difficult time with her identity.

Valentine began her physical transition in September 2011. She has been living full-time as a female for more than a year.

“I don’t think it will ever be complete and that’s not a negative thing,” she said. “I really don’t care about a destination because I’m loving the journey so much, getting to know myself, getting to truly truly look deep into myself and be honest and be open and be, even with trepidation, joyful of discovering who I can really be and what my potential really is.”

Valentine works for Friends Research Institute, an organization where she is a Program Coordinator overseeing LA County and Center for Disease Control programs able to help people who are transgender and who are at significantly high risk for HIV and Hepatitis infections.

At CSUN she works as a peer mentor at the Pride Center. Attending CSUN has helped her find her voice and become a better advocate, public speaker and educator.

“I think CSUN itself is going through a significant change in regards to what they can offer those in the community that are gender-questioning and or are openly trans,” Valentine said. “There is still much work to do.”

“If you understand the difference between sexual identity and gender identity in which ‘LGB’ represents sexual identity, ‘T’ represents gender identity, they are two very different populations in many regards, with many times, many different needs, so lumping them all together especially when the first three are outpacing the ‘T;’ the concept of a resource center may backfire,” she said.

The center helps create a safe space and environment that strives to be genuinely all inclusive and open to ideas and dialogue from people from all walks of life without the fear of judgement.

She describes working at the center as a challenge but at the same time rewarding to help people on campus by being able to serve as a voice for those who feel like they don’t have one.

“There is a significant gender-questioning population at CSUN but people don’t realize it because we many times blend into the shadows,” Valentine said.

She said there are not many good transgender role-models in the media and if they are not symbolically annihilated they are often portrayed in a negative light, and often depicted as criminals, deviants and sociopaths.

She believes she can help open people’s eyes and create more awareness to the issues facing people who are transgender.

“Many people think that they get it when they really don’t and they still do and say things that, in many instances, are not things that come from any form of malice but just come from a place of ignorance,” she said.

Valentine’s goal is to complete her bachelor’s degree in psychology, then attain a master’s degree in social work to become a counseling and treatment specialist for the transgender-at-risk youth.

She came to CSUN with a plan to succeed academically. However, that is not the only goal she strives to accomplish. Fueled by her passion for equality, Valentine said she will continue to advocate and bring about awareness in hopes that she will leave CSUN a safer and overall better environment than when she found it, particularly for those who are transgender or gender-questioning.

It is because of her understanding of being a part of a community that has so often been poorly represented and discriminated against that she is driven to make an impact and create positive change in society.

“It’s a journey, it’s been an amazing one so far and I’m looking forward to everything that still lays in my path,” she said.