Obama puts politics over principles in his Middle East trip 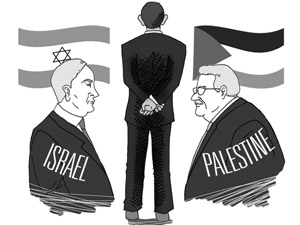 Obama will be taking his first trip to the Middle East this month and plans to touch down in Israel as well as the occupied West Bank. Obama, who during his presidential campaign in 2008 pledged to work for Middle East peace, will be focusing on Iran’s nuclear weapons program and the civil war in Syria. But as White House press secretary stated, is not going to make advances on the Israeli-Palestinian peace talks deadlock.

The relationship that Israeli Prime Minister Benjamin Netanyahu and Obama share is rocky to say the least, but this trip should be an opportunity to mend any differences and progress toward peace. The White House is trying to quell any expectations regarding this trip but Obama needs to get off the sidelines and draw up a plan for a two-state solution.

Obama, who accepted a Nobel Peace prize in 2009, made references to peace and aiding the marginalized, which sounded very “hopeful” but will most likely end up being hot air.

“We must be a source of hope to the poor, the sick, the marginalized, the victims of prejudice – not out of mere charity, but because peace in our time requires the constant advance of those principles that our common creed describes: tolerance and opportunity; human dignity and justice,” Obama said.

If Obama is to stay true to his words when he is in the Middle East, he must acknowledge the human rights abuses and war crimes the U.S.’s closest Middle East ally Israel, has committed against Palestine.

Obama’s visit to Ramallah is not being received with as much excitement as it is in Israel because as previous attempts proved, the peace process can only go so far and mainly offers a bandage for a much deeper wound. Perhaps more importantly, the U.S. has not been able to provide or help create a justifiable solution for Palestinians; a people who have faced severe human rights abuses including severe military attacks and bombardments, annexation and apartheid, blockades preventing humanitarian aid to Gaza, and illegal Israeli settlements on Palestinian land.

According to ProCon.org, a non-profit, independent public charity, since the second Intifada in 2000 through 2012, more than 6,500 Palestinians have been killed by Israeli security forces while more than 350 Israelis were killed by Palestinians. Thus, Israel’s claim of needing to protect themselves from Palestinian terrorists is a poor excuse when the numbers are laid bare. The U.S. is complicit in this mass slaughter and results in a taxpayer funded ethnic cleansing.

It’s clear that Obama is stalwart in his intent at keeping Israel as an ally despite all the atrocious crimes they have committed against Palestine and this has more to do with grotesque politics than anything else.

The powerful Israeli lobby and the status conferred upon Israel as a close ally in a territory replete with anti-U.S. sentiment has always kept the U.S. from criticizing them too harshly, refusing military aid, and standing with most members of the U.N. at Palestine’s side.

Undeniable, Obama was critical of Israel when Netanyahu announced new settlement plans and disregarded the 10-month pause in building settlements on Palestinian land. However, he did not withhold the more than $30 billion annual military aid package to Israel.

As the trips preparation is underway, Israel prepares for Obama’s arrival which they have dubbed “,Unbreakable Alliance 2013”. Peace talks can and most likely will transpire, considering Netanyahu has said on the agenda for discussion are Iran, Syria, and the peace talks with Palestine. A trip like this can simply be symbolic or it can be the start of a groundbreaking initiative that fixes some of the tumultuous angst currently seen in the Middle East.

Obama needs to disregard the power of corporate lobbyists and AIPAC and follow through with his pledge for peace in our time and protect every human’s rights. It’s imperative to remember that this is not really about taking sides. Rather, when making an attempt at an humanitarian solution, we need to look at the problem objectively and not engulf ourselves in politically expediency.

Lastly, Obama needs an image boost. By implementing drone strikes in the Middle East and putting the Israel-Palestine on the back burner, Obama hasn’t looked the least bit empathetic toward the Middle East. It shouldn’t be up to the U.S. to fix other nations, but when we have heavily involved ourselves militarily and financially, we assume responsibility to act. The people of that region, especially Palestine, need to be reassured that Obama is working on a solution that works for both regions, not just an apartheid Israel.