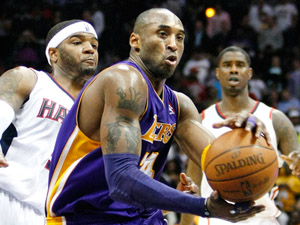 Many fans, including myself, lost hope for making the postseason when the Lakers were buried in a midseason sub-.500 hole and it was announced that starting power forward Pau Gasol would miss six weeks due to a ligament tear in his foot.

The Lakers, however, stayed valiant as they are in the midst of a late-season push for a playoff slot. They reached .500 for the first time in two months after Kobe Bryant’s late-game heroics Sunday night against Atlanta, which saw him both posterize and hit a game-winner over noted defender Josh Smith.

The Lakers, who have only 22 games left in the season, are just two games behind Utah for the eight seed, and they’ll have no problem overtaking the inexperienced, injured Jazz.

Lately, Utah has been in a bit of a bind; injuries to key players, like starting big men Paul Milsap and Al Jefferson, have caused them to lose four out of their last five games, their lone win coming against the woeful Bobcats. Though backups Derrick Favors and Enes Kanter have filled the void left behind by Milsap and Jefferson well by putting up similar stats, their presence in the starting lineup leaves Utah with no bench.

With a tough schedule ahead of them in which they face numerous top teams (such as Oklahoma, Memphis, Denver, Brooklyn and San Antonio — some of them twice), there’s no way Utah can hold on and resist the surging Lakers. The Jazz lack experience — both through the players and coaching staff — will hinder their ability to stay poised under pressure to defeat some of the tougher teams they need to.

Los Angeles has won five out of its last six games as the team has finally seen Dwight Howard’s back and shoulder injuries continue to improve, leading to better overall defense and rebounding. Howard is averaging 14.2 rebounds and 2.4 blocks during his last five games, and is more actively looking to contest shots and protect the paint.

The Lakers are still getting incredible production out superstar guard Kobe Bryant. Bryant is averaging 35 points, 7.2 rebounds and 5.8 assists per game on a blazing 57 percent from the field during his last five outings. His scoring output, sheer will and warrior-like attitude are what will give the Lakers the edge and mental toughness they need to overcome the potential embarrassment of having a team with a salary of over $100 million miss the postseason.

If Los Angeles can squeeze into the playoffs, and it looks like they definitely will, the return of Gasol could make an interesting first-round matchup between the Lakers and the Thunder or Spurs. Facing the Thunder would still be an incredible challenge, but the Spurs have been victimized by an eight seed before, and the Lakers are perfect candidates for usurping their long-time foes.