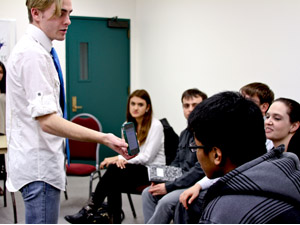 With such a diverse student population, CSUN has an even more diverse set of political clubs. From the dark horse Libertarians and the Greens to the well-known Democrats and Conservatives, there’s a club to represent the political interests of any student.

When Michelangelo Landgrave, 21, first started attending Cal State Northridge in 2009, the only active political club he could find on campus was the Young Democrats, a student club dedicated to liberal political philosophy.

“There was no real alternative,” Landgravesaid. “You were either a democrat or you weren’t in a political club at all.”

He founded the CSUN Libertarian Club just two years ago as an alternative that meshed with his own Libertarian philosophy. As the president of the club, he was also the only member for eight months.

But as time went on, students became interested in the new direction Landgrave was taking.

Searching for a conservative club to no avail, Roger Atlas, 19, a sophomore music major, stumbled upon the Libertarian Club during his first semester at CSUN.

Though he tends to lean conservative on many fronts, the Libertarian views quickly became appealing to him.

“The thing I love about the Libertarian Party and movement that the conservatives never have is this omniscience of liberty,” Atlas said.

“It’s socially liberal. It’s fiscally responsible. It’s very economically feasible,” Palmer said. “Socially, it’s a tolerant party. As long as you’re not harming someone, you’re allowed to do what you want to do. I think that message resounds with a lot of college students nowadays.”

Landgrave, however, recognizes that political interest among students can be difficult to maintain.

“They recognize, ‘I’m such a small minority. I’m never going to win an election. I’m just not going to worry about politics,” Landgrave said.

It is for these reasons that a Libertarian presence on campus hasn’t been maintained over the years, he said.

“There used to be a Libertarian club back in the ’80s. It lasted for a while, but then it just crashed,” Landgrave said. “For several decades we had attempts to make a club again but it always failed because the founding president just left when there wasn’t a structure left in it.”

Landgrave, as the founder, remains a member of the club although he no longer attends CSUN.

“I’m hoping, with this club, to encourage members to stay politically active and remind them that they are not alone,” he said. “There are other Libertarians. We’re small, but we’re definitely here.”

Palmer said the club has tried to organize political debates with other political clubs on campus in the past, but they have never come to fruition. The seven-member club, for now, is simply a place for intelligent discussion.

Gary Johnson, the Libertarian candidate in the 2012 presidential race, won more votes than any candidate has ever won for the Libertarian Party. Palmer is glad that a candidate from their party could make it as far as Johnson did.

The CSUN Greens focus on a distinct set of ideologies differing from that of its counterparts. And in addition to the frequent association with environmental and climate change concerns, the Greens at CSUN also spotlight other issues.

“We talk about the minimum wage,” said Edy Alvarez, 24, a senior political science major and president of the CSUN Greens. “Every state adopts its own minimum wage, but we talk about a thing called the living wage.”

He says the party believes the federal minimum wage isn’t enough to maintain quality of life, an important and often overlooked issue.

The CSUN Greens currently has about five core members.

“Not a lot of people even know the Green Party exists, let alone that it’s on campus,” Alvarez said. “You ask people who they’re voting for and it’s the typical answer. Either ‘I’m not voting’ or ‘I’ll vote for a Democrat or a Republican.'”

These key values are what sparked the political interest of former CSUN Greens President Marlon Stern.

Though no longer a student, Stern still plays an active role in the Greens, trying to maintain a sense of community instead of passively letting the club diminish.

He said that active involvement in a political club isn’t very appealing to students, let alone the idea of third-party politics, compared to Greek clubs. But he wants students to know that political involvement can be fun as well.

“There’s a whole world out there of people who are being young and having fun,” Stern said about those involved in the party. “It’s just they’re doing it in this conscious way.”

He said the club plans to throw a concert on campus next semester, featuring bands from around the valley, in hopes of raising student interest in the party’s presence.

But for students, the clubs are a start.

The CSUN Young
Democrats formed in the early 2000s and has been active ever
since. The club believes in full LGBT equality and the right to
healthcare for all citizens, regardless of their financial situation,
among other ideologies.

According to Ty Halen, president of the CSUN Young Democrats, the club also provides good opportunities for the future.

“We
have the pleasure and honor of meeting, working, and talking to
politicians and public figures one-on-one, attend a wide array of
events, and travel to different conventions all across California,” he said.

The club provides plenty of opportunities for possible
internships, volunteer work, and jobs. Senior political science major,
Adam Lane, was hired last year to be a campaign staffer for Raul Bocanegra who was running for the 2012 State Assembly.

They even had the opportunity to
volunteer in Las Vegas for President Obama’s reelection. All expenses were paid and they were the largest group of young democrats to
come out of Los Angeles and volunteer for in a
neighboring state.

Membership for this club
has gone as high as 20, but has now decreased to 10, largely due to a
large majority of their active members graduating last semester. The
CSUN Young Democrats are looking for new members and are open to anyone due to their strict non-discriminatory policy.

“Our
diverse membership guarantees a diverse approach to every topic and
ensures we host and attend events that reflect everyone’s interests,”
Halen said. “We only provide a no-pressure, friendly atmosphere that
embraces and supports participation of everyone – even if we disagree
with them.”

Xochitl Medrano, vice president and sophomore
political science major, shared her experience being a part of the
Young Democrats.

“Being a member of the Young Democrats has
become essential in my life and it’s an honor to be a member,” Medrano said. “The members welcomed me
with open arms and gave me a chance to show what I was made of.”

The club also gets involved in the community. Members stay
active by attending events hosted by other democratic organizations in
the area such as the San Fernando Valley Young Democrats, UCLA Bruin Democrats, and the Los
Angeles County Young Democrats.

The CSUN
Young Democrats’ outreach is mainly focused on advertising
its events and speakers, as well as events they plan to attend, in order
to gain the attention of students.

“We are hoping to team up with CSUN’s other political party clubs to combat political apathy,” Halen said.

The CSUN College Conservatives serves as an open forum of discussion for students. The
club formed in fall 2011 and is aimed to support conservative candidates
and promote conservative views on campus. The club believes in
upholding the Constitution in concurrence with the intent in which it
was written and also believes in limited government with localized
solutions.

According to CSUN College Conservatives Vice President Jessica Markham, the club is open to anyone.

“We
are a very inclusive club and encourage everyone to get involved,” Markham said. “Similar to our ideological belief, we believe the strength of
our club is founded in our membership and not in a strong executive
committee.”

The CSUN College
Conservatives strive to maintain a balance between social events and
political events. In addition to
meeting on campus bi-weekly, the club also has
social events to bring members closer, including bowling on Friday nights and dining together at a local spot.

One
of their most recent events was titled “Reagan Rager” in which the CSUN
College Conservatives teamed with the Bruin Republicans of UCLA to
celebrate the late Ronald Reagan’s birthday.

The
CSUN College Conservatives currently has 30 members. However, the club has grown substantially since its
inception in fall 2011. It has gone from five members, to 15
members, to its current total of 30.

“This
semester we will focus on being more active on and off campus, raising
awareness on campus, recruiting, and fundraising,” Vassalli said. “We
also hope to begin actively working alongside other political clubs on
campus.”