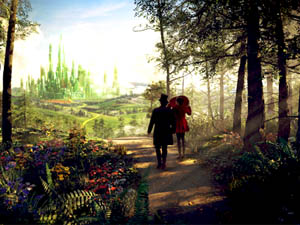 James Franco has acted in an uncountable number of roles of every variety, in both indie films and Hollywood blockbusters. He’s written compelling screenplays, spends time in the director’s chair, and has taught (and still teaches) at some of the country’s most prestigious universities.

He once acted as a drug-addicted speed dealer with a genius IQ in “Good Time Max,” portrayed a washed-up hippie-stoner in “Pineapple Express,” played the best friend and nemesis of Peter Parker in “Spiderman,” and the list goes on and on.

In “Spring Breakers,” to be released March 22, Franco portrays a gangster rapper by the name of Alien, who promises to give a group of four college girls a spring break they will never forget.

In light of his latest work, “Oz the Great and Powerful,” in theaters Friday, Franco discussed with the Daily Sundial his balancing of the worlds of academia and celebrity, his time spent working with director Sam Raimi, his preparation for the role of Oz and what it’s like portraying a character from the first books he ever read for leisure.

Daily Sundial: Recently, you’ve been doing a lot of serious movies. Why did you decide to attach yourself to this more family-fun, adventure film?

James Franco: Well, I’ve been a fan of the Oz books, the L. Frank Baum Oz books, since I was a boy. I read all of them when I was 11. They were some of the first books that I read on my own for pleasure and I’ve worked with the director, Sam Raimi, in three previous films and so this was another chance to work with him. And then, in addition to that, I saw the role as something I could have a lot of fun with and be fairly creative with. He was written as a comedic character within this fantastical world and I found that combination to be fairly unusual and I just thought it would be a juxtaposition of two different things, comedy and fantasy, that would result in something entertaining.

DS: When taking up this project, did you have any initial hesitations about portraying this character that you had read about?

JF: Yeah, because I was an Oz fan, I wanted to be sure that they had a sound approach, and I was already very hopeful because Sam was involved, he’s just one of best directors, and I knew that they would capture the visuals of the movie very well, or at least I had hopes that they would. But I wanted to be sure that they were being loyal to certain things about Oz that people expect and then also had a fresh take on it. And they did. They had all the elements you need in order for people to recognize the world of Oz. You had the Yellow Brick Road and the Emerald City, witches and flying monkeys, a bunch of strange creatures and Munchkins. All the things that make up what we imagine Oz to be. But then I saw that their approach to the world, thatthe emissary into the world was not a male version of Dorothy, fortunately and that they weren’t just gonna redo it with an innocent young person kind of walking through Oz. That my character was, instead, a kind of con man that was stumbling through Oz, and because he’s pretending to be something he’s not, he gets into a lot of awkward situations that could be played for comedy. And I thought that comedic edge would help distinguish this version of Oz from other versions.

DS: How did you prepare for the role of Oz both physically and mentally?

JF: Well, I had to be able to carry myself as a magician because my character, Oscar Diggs, starts off as a traveling magician in a circus, and we even see a bit of one of his shows. So I needed to be able to do that, those tricks convincingly and to hold myself on stage like a magician in a convincing way. So they hired one of the best magicians in Las Vegas, Lance Burton, to come to Detroit, and I was fortunate enough to have private lessons with him. He taught me how to make it look like I’m having people levitate and make it look like they’re evaporating in front of everyone’s eyes, and then also just kind of how to hold myself on stage. He taught me all of that, so it was great.

DS: What was your first impression or interpretation of Oscar/Oz when reading the script for the first time?

JF: (That) his character starts off as a flawed man. He’s selfish, he’s a bit of a womanizer, he thinks that happiness will come from financial success and fame. And it blinds him to love the people around him. And I saw that one of the reasons to start the character off that way was that it would allow for growth in the character, and that the movie would not just be a physical journey through a mystical land, but it would also involve an inner journey for the character.

DS: What did you personally bring to the character Oz?

JF: I guess I’d been doing a fair amount of comedies recently, and I saw this movie and this role as a chance to use some of the comedy shops that I had been developing in some other full-out comedies, but do it within a movie that had more of an adventure tale, a structure. And so I like this idea of a comedic character within an epic movie.

DS: What can fans of yours expect to see from you in this film that they might not have seen before?

JF: I guess it is a slightly different character than I’ve played in other films. I like the character because he’s very dimensional, you know. There’s a little bit of everything. He’s a bit of a charmer, a conman, magician, an adventurer, he can be brave and cowardly, he has a tender side, and so it’s all kind of wrapped up in one character. So maybe there’s something there that will be fresh.

DS: What’s different about working with Sam Raimi now than it was when you were working on Spiderman?

JF: I’ve known Sam for over 10 years. He is one of my favorite directors to work with and he makes some of my favorite films. When I worked on Spiderman with him, I was a supporting character, and Sam Raimi identifies with his lead characters very closely. And so he very much identified with Peter Parker. And because my character was trying to kill Peter Parker, I think Sam blamed me for that, not in a harsh way, but I felt like I got a little less love than Tobey Maguire on those films just because of what the character was doing. And now that I’m the protagonist in Oz, Sam is identifying with my character. And so I felt a lot more of Sam’s love on this film.

DS: How has it been balancing between your acting career and your collegiate education and endeavors?

JF: I insist that I have this balance of an academic career and a film career. It’s, um, in a lot of ways saved my life or made me a much happier person. I love the academic world. During the past seven years I’ve gone to quite a few schools. I got a little addicted to school but now I’m doing a lot more teaching than I am going, studying, and it’s a great new chapter in my life. I love teaching. I love being able to- I usually teach in creative programs, film programs, writing programs, or art programs, and I love being able to focus on other people’s work and, you know, it takes me out of myself. I don’t have to think about my work all the time. I get to think about others.

DS: Your filmography as an actor and director is one of the most diverse in Hollywood. How do you balance your work in Oz with an indie film like Spring Breakers?

JF: Well, they’re very different movies, but there are essential things about making movies that are in both films. And I guess I just go into the different projects trying to figure out what the tone of the film is, what my place in the film is and how I can best fit into that world. So, I just had to play him as believable as possible. He’s like a gangster, mystic, rapper, and the Oz character is, you know, a magician/con man, so I just had to figure out how to play each of those roles as realistically as possible.