Morrissey’s softer side comes out at Staples Center show 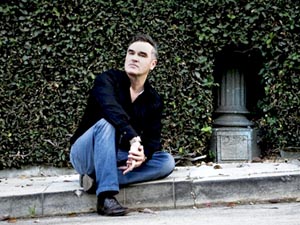 Watching an influential artist overcome a bloody ulcer and continue giving his fans shows is a phenomenal thing to watch. Watching Morrissey do just that was unbelievable.

The outspoken vegan and musician, that first made history by being the lead singer for The Smiths, is widely known for being rude. He is famous for cutting shows short because of fans jumping on stage and hugging him. He also refuses to be friends with almost anyone. The March 1 show at the Staples Center was a game change for Morrissey though. He showed a side of himself that most fans have never seen, and that is the side of appreciation. The Staples Center was filled, having been sold out for months, and Morrissey made sure to let everyone there know that he was grateful for them coming. “If I had to die right here, I would be happy to be with you,” he said.

He also made sure to pass the microphone to fans in the first row; one of them thanking Morrissey for keeping him sane, which to Morrissey replied: “thank you for keeping me sane.”

After having to cancel shows because of his bleeding ulcer, Morrissey has been the talk of controversies lately. What else do you expect from someone who’s most controversial track is “I Have Forgiven Jesus?” First was his refusal to perform at the Jimmy Kimmel show because the stars of Duck Dynasty were there. Then was his rant on Beyonce’s purses causing the extinction of rhinos.

Yet, controversies or a bleeding ulcer didn’t stop the artist from successfully performing an exclusive show at the Hollywood High School auditorium Saturday. Though Morrissey’s performance was clear, the singer would have to pause to take a couple of breaths.

At 53 years old, he can still belch out “How Soon is Now?” as if he were still the skinny young singer for The Smiths.

Though the Staples Center performance stated that Morrissey would be performing with rock icon Patti Smith, no duet was sung by them. Patti Smith opened for Morrissey after the opening act by Kristeen Young. Though it would be nice to have the “Horses” singer sing with Morrissey, it just further proved that Morrissey is so big that he can have an iconic artist open for him. Maybe that’s why he is finally appreciating his fans more. Who knows, maybe Morrissey will finally want to be our friend.