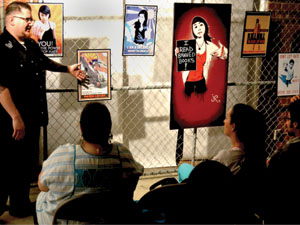 The opening reception of “The Art of Rebellion: Social Justice and Chicana/o Visual Arts,” at the Chicana/o house last Friday, exhibited artwork from Jake Prendez, 36, a Chicana/o studies graduate student at CSUN.

Prendez, who marked the end of his graduate program by presenting this gallery, talked about his inspirations. “I’m driven by the underdog, the downtrodden and the oppressed,” he said. “I’m driven by what I see culturally and politically. Things like immigration, workers’ rights and the oppression of women.”

A few of Prendez’s models, that he painted in his work, were present; among them, Sonia Salazar, 25, a marriage and family therapist. “(Prendez’s) art represents hope for future generations through the concept of educating the youth and paying it forward to them,” Salazar said.

Prendez uses styles derived from Chicana/o culture, political campaign art and street art. In one of his favorite works titled “Genetic Memory,” he said that the cultural symbols of seeds that the ancestors held, have grown so that the seventh generation may reap the benefits, which are represented by the flower symbol.

Yreina Cervantez, a full-time professor for the department of Chicana/o studies, said, “His art reflects social justice and cultural issues.”

Prendez has faced many obstacles, including dyslexia and being told by a teacher that he would be shot and killed before leaving high school. Yet despite these obstacles, he is going to complete his masters in Chicana/o studies at CSUN.