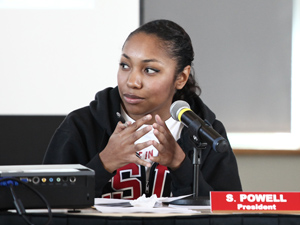 Associated Students met Friday to discuss the new iPad Initiative, and a survey for students that will be on the ballot during the upcoming elections.

The biggest issue was the integration of iPads in many classes at CSUN, possibly by Fall 2013. Woolett clarified that the iPads would mostly be for upper-division courses. Only a few majors have been confirmed so far, including biology, journalism and kinesiology.

President Sydni Powell added that one of the few concerns over the iPad Initiative is whether it will be seen as an “unintentional endorsement” of the Apple company’s less than ethical business practices.

Powell acknowledged the fear, but maintained that their main priority was the advancement of students through this initiative.

“It’s the idea of flipping the classroom,” Woolett said. “Instead of coming into class and listening to a lecture, you would do that for homework.”

The program would allow for class time that would be spent lecturing to be spent doing group work or clarifying information. ACT and ACAT reported that when used in trial runs, 70 percent of students watch the lectures.

Before adjourning, the Senate looked over a survey that will be presented to students on the Spring 2013 elections ballot.

Students will have the chance to give their opinion on topics such as the creation of a Matador football team, a Freshman Orientation Camp and the development of a Matador Bike program, which would rent, repair or even sell bikes on campus.