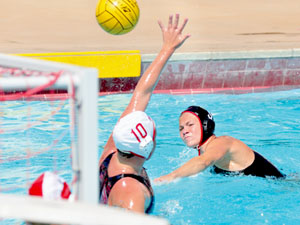 The game began quickly with a goal from CSUN’s junior attacker Lindsy Nelson, which was quickly followed by a goal from UCD’s senior utility Jessica Dunn seconds later. Back-to-back goals became a trend which continued for the majority of the game, with neither team holding more than a two goal lead.

With 7:01 left in the half, Northridge junior attacker Melissa Doll’s goal gave the Matadors a 4-2 lead, their biggest of the match. The Aggies responded with a 4-1 run to end the first half leading 6-5.

At half time, head coach Marcelo Leonardi told the team they needed to capitalize on scoring opportunities.

The Aggies lead would not last long as the Matadors tied the game back up 30 seconds into the third period with a goal from Nelson, her third of the game. After a retaliation goal from Dunn, CSUN sophomore center Marisa Young scored two back-to-back goals.

The third period ended 8-8, marking the sixth time the game was tied.

“(At half-time) we knew that we were in the game. When we go down we never give up,” Young said. “We have the determination to get back in the game and we never doubt ourselves.”

In a physical and competitive fourth period, the Matadors held the lead for 16 seconds, and didn’t possess it again until the final 42 seconds.

In the last minute, Janke made the game winning shot past Woods, her lone goal of the match. The Aggies had one last chance to score that was thwarted on a save by sophomore goalkeeper Kiernan Davis.

“I couldn’t have done it without the rest of the team,” said Janke of her game-winning goal. “The girls that scored multiple goals, they set it up. The way our sets were drawing back the crash, I wouldn’t have been open 6 on 5 for that. I can’t take credit for it.”

Leonardi said that the intensity at the end of the game may have something to do with their preparation at practice.

“We simulate the last two three minutes of the game, whether we are up by one, down by one, we have the ball or don’t have the ball and I thought that it really applied there,” Leonardi said.