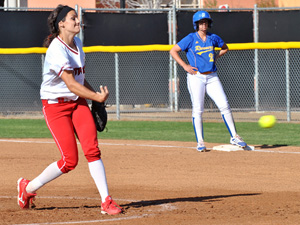 Playing their first home doubleheader of the season, the Matadors (10-16) softball team split Saturday’s games with visiting CSU Bakersfield (2-13), losing 3-2 in the first and winning 4-2 in the final.

In the second game, the Roadrunners came out strong in the top of the first, loading the bases with two outs. Sophomore starting pitcher Brianna Elder was unable to get out of the jam and was replaced on the mound by senior pitcher Mia Pagano.

“All of our pitchers know that we have high expectations for them and we have our own little system that we’ve been working out,” said head coach Tairia Flowers. “It was just time to make a change, and (Brianna) knew she had to be ready to go back in, but Mia was ready to go from the start and she just did a good job for us.”

Pagano got CSUN out of the top half of the inning, striking out the only batter she faced in the first, one of her seven in the game.

“I just knew I had to do a job and I was there to help (Brianna) out in the best way that I could,” Pagano said. “I just wanted to shut down the team and set a different tone for the game.”

The Matadors struck first, scoring in the bottom of the first. Sophomore center fielder Abby Linn looped a single over the Bakersfield junior shortstop Shay Fryer, and came around to score on three wild pitches.

The Matadors threatened again in the bottom of the third, loading the bases with one out. Freshman shortstop Maylynn Mitchell sent a seeing eye single through the left side of the infield, scoring another Northridge run, putting its lead at 2-0.

Bakersfield closed the gap, scoring in the top half of the fourth inning, on a throwing error by senior second baseman Korinne Randazzo.

Unable to start much on the offensive front, Northridge capitalized on errors by Bakersfield freshman pitcher Amber Mills. Already scoring one run off of a wild pitch, the Matadors plated two more runs in the bottom of the sixth on a wild pitch and RBI groundout, extending their lead to 4-1.

“I knew that it wasn’t my best pitch, but I knew that we were going to win the game,” Pagano said about the home run. “I had to come back at the next two batters and couldn’t let anything up or think they could get away with anymore runs than that.”

Pitching 6.1 innings in relief, Pagano let up the final run of the game on a solo home run in the top of the seventh to sophomore second baseman Adrianna Cardoza.

Northridge’s offense only recorded five hits to go along with their three in the previous game, and Randazzo was responsible for four of the eight hits.

“I was just feeling good at the plate, her ball wasn’t moving too much on me,” said Randazzo, who went 4 for 6 in the doubleheader, scoring two runs.

The win was the Matadors tenth of the season, matching their total from the 2012 season.

“It’s always exciting to do better than you do last year, but this is in no way the benchmark that we were looking for,” Flowers said. “We are going to keep moving along, we talked about that as a staff before the game and we wanted to finish the day a game ahead of where we were last year. We just have to keep coming out here and working.”