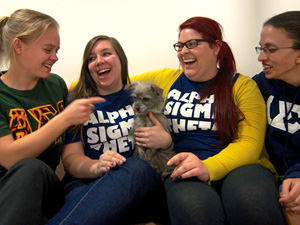 A small mutt with scruffy grey fur enters the room. She is sitting, unnoticeable, inside a crocheted Dakine backpack littered with pink, white and teal colors. The backpack is hooked to the back of 23-year-old child and adolescent development major Danielle Sprague.

The two of them sit on a couch. The dog exits the backpack calmly upon Sprague’s command for her to sit, which is relayed through sign language. This dog, a mix of chihuahua and maltese poodle, is named Hazel and belongs to Sprague, president of Alpha Sigma Theta.

Hazel is an honorary member of the sorority that, in the words of Vice President Holly Kerker, 23, an English major, caters to the deaf community. It provides deaf women a place that encourages leadership, socialization and overcoming challenges.

“That’s what our letters stand for,” said Elizabeth Noles, 26, deaf studies major and spirit chair of Alpha Sigma Theta as she pointed to each individual letter on her sweater shirt: The alpha symbol stands for leadership, sigma stands for socialization, and theta stands for challenging.

The alpha chapter of Alpha Sigma Theta was founded on April 17, 1984 in Rochester, NY at Rochester Institute of Technology. The gamma chapter came to CSUN on May 13, 1987.

CSUN houses the only active chapter of Alpha Sigma Theta. The alpha chapter was suspended for substance use during an event
about a year and a half ago, and the beta chapter is currently shut
down.

Many of the women involved have been part of the deaf community for much longer than their membership in the sorority. Both Kerker and Sprague were born into non-hearing families, and American Sign Language is their first language.

Samantha Fina, 20, deaf studies major and member of the sorority, said she began signing at age 14 when it was offered at her high school because of theater involvement. It felt natural to her.

Kerker said all of the women in the sorority are diverse. They all have different interests, different majors and different backgrounds, but the sorority is the one thing that unites them all.

She identifies as a child of a deaf adult and has been involved with Alpha Sigma Theta for three and a half years.

Noles joined the sorority when she decided she wanted to step out of her comfort zone. She has always been shy but has broken out of her shell and been involved with the sorority for two years.

Sprague, Kerker, Fina and Noles all identify the sorority as a family.

As a family that is so dedicated and invested in the deaf community, they take part in many philanthropic activities. The group is a major supporter of Deaf Hope, an organization with a mission to end domestic and sexual violence through empowerment, education and services.

On March 1 Alpha Sigma Theta hosed a show called “Real Women, Real Beauty.” It provided an opportunity for real
women to bring awareness on women’s experiences with domestic violence
and empower all women.

All proceeds from the show were donated to Deaf Hope.

The women of Alpha Sigma Theta are also supporters and volunteers at the Greater Los Angeles Agency on Deafness.

The sorority has also adopted Zuma beach and cleans it up twice per semester.

According to Kerker, unlike most other sororities and fraternities, all meetings and gatherings are voices off, signing only.

Kerker said there are 10 women who showed interest in joining the sorority this semester and who are currently going through the new member process.

“I was really impressed at the first meeting by their understanding,” Sprague said about the the new recruits.

Kerker and Sprague are both excited for their new members and the expansion of their family.

“We don’t always like each other, but we always love each other,” said Noles. “Sometimes we are dysfunctional and we fight but at the end of the day we are family.”

Included in that family is Hazel, the family dog, who the group has planned on adding to their composite, a compilation that features a picture of each of the year’s members, this year, giving her her own portrait.