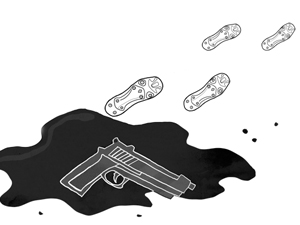 Aggression and physicality is an integral and necessary part of sports, but unfortunately it has spilled into the homes of many prominent athletes. Athletes have been increasingly linked to domestic violence and it has developed into a growing trend that frankly makes me cringe.

The most recent athlete turned killer is Oscar Pistorius, who has been accused of murdering his 26-year-old girlfriend, Reeva Steenkamp. Pistorious was a double amputee who competed in the London Olympics and was often regarded as an inspirational and heroic sports figure who overcame all odds to compete and this is precisely where the problem lies.

The media elevated Pistorius to hero status much too early and we as a society forgot that he is in fact mortal and can make mistakes. We were all caught up in a whirlwind of passion and the tide of tearjerking stories that were perpetuated by media outlets fed into this frenzy

This story is reminiscent of the O.J. Simpson trial. Both were implicated in the killings of their significant others after previous reports of domestic violence were ignored and investigators botched the forensics of both cim scenes. Instead of focusing on the victims and the atrocious crimes that were committed, our society is fascinated by the media circus that these trials create. The media preys on these potential ratings and it brings more attention to the killer as opposed to the victim and the idea of domestic abuse and murder as a growing problem in our country.

According to the National Coalition Against Domestic Violence (NCADV), one in every four women will experience some sort of domestic violence in their life time and most cases aren’t even reported to the police. This statistic is alarming enough, but when we see pro athletes, whom young and impressionable athletes revere and emulate, committing such heinous crimes, it is especially tough to stomach.

According to the National Coalition Against Violent Athletes (NCAVA) in a 1995 study, 8.5 percent of the national population was charged with assault while 36.8 percent of athletes were charged with that same offense. This is a very striking statistic.

Although there isn’t a link between athletes and domestic violence there are some factors that inevitably play into it. First off, professional athletes have to be focused and driven, more so than the average person. Their job is to compete on a nightly basis and to beat an opponent by any means necessary. At times, they are relentless in pursuit of their goal and all those characteristics sometimes subconsciously overflow into the home life where a verbal dispute can turn violent.

Second, athletes are fed with a golden spoon since the day they turn pro, sometimes even before, and many of them lose sight of values and morals that they either learned growing up or missed altogether. They get money, attention, fame, and essentially anything else that they ask for and for that they have a hard time grasping onto the concept of things not always going their way.

When a successful athlete is used to having everything be about them, their intimate relationships often suffer.

Although athletes are mainly responsible for their actions, the leagues and teams they play for are doing an atrocious job of regulating and handing down punishments for these violent acts.

In 2010, then Los Angeles Lakers forward Matt Barnes was arrested for domestic violence in Sacramento after the police observed his girlfriend had sustained visible injuries during an altercation with Barnes. He later posted a $50,000 bond and was released with no further repercussions.

When he arrived back in LA for the start of the season, neither the NBA nor the Lakers organization punished Barnes for his actions and unfortunately this is a common theme among all sports. According to the NCAVA, the general population has a conviction rate of 80 percent while athletes have a conviction rate of just 38 percent.

This double standard that has lived with athletes and celebrities has lived on too long and there needs to be more extreme punishments for off the court conduct, especially something as serious as domestic violence. Some punishments could include indefinite suspension, lower salary, and even being permanently released from the team or league.

What a player may lose in salary and employment doesn’t begin to compare to the lifetime of emotional and physical pain that a woman who suffered abuse has to continually go through.

If I work for a company and I receive a DUI or commit any sort of crime, there is no doubt in my mind that I will be fired or severely punished for my actions. There is no forgiveness in the real world for blue-collar jobs so this double standard and this notion that every athlete gets off the hook for their despicable actions needs to disintegrate.

We as sports fans, and society as a whole, need to stop forgetting and forgiving as soon as these athletes do something positive in their realm. A game-winning home run or a last second buzzer-beater does not erase physical abuse left by irresponsible fists and emotions.

What do all these athletes have in common? They were elevated to a pedestal of invincibility and clouded by attention, fame, and money. Once you feel like you are on top of the world, the only thing that can bring you down is a courtroom filled with weeping families of the victims that you designated as targets for your anger.

Hitting another human being is wrong in its own right, but the idea of a man hitting a woman is something I have trouble visualizing and when I do, nothing makes me sicker. It inhabits a degree of cowardice and inhumane nature and athletes in the public eye should be made as examples when they engage in it as well as victims being consoled and comforted by the repercussions they face.